Review of Heather Babcock's 'Of Being Underground and Moving Backwards'

Of Being Underground and Moving Backwards, a collection of short stories by Heather Babcock, is a searingly beautiful read. She writes with dark, piercing poetry of the undersides of the life of those who precariously live on the edges of the working class. Many of the women are hookers, from a mermaid whose first trick finds her sleeping with a drowning man who has tested positive, to an office cleaner in a high tower who travels the subway naked under her coat looking for men to tantalize.

"Wilbur was underwater now - a graceful Sea lion - the noise surrounding him having gone white.

A Plasticine-blue woman smiled at Wilbur from across the bar - except that she wasn't really a woman at all, but rather a mermaid. A shiny and beautiful mermaid: smiling only for him." (Half Off, 6)

The erotic body figures in each story, but its beauty, its soft fluids and skin, is stained with ironies, with an unwanted pregnancy that we learn of as a male character dreams of a pregnant cat under his bed who is starving, or a mother whose thin dress reveals her pubic triangle and who garners cat calls from the boys in the mall. Perhaps at the deepest centre of these stories is a grandfather who loved his granddaughter too much and her suicide is an unfathomable loss that echoes as the narrator lays sunflowers on both of their graves while she pisses on his.

"I placed one of the sunflowers beside my grandfather's grave. Maybe Pumpkin had killed herself because she couldn't bring herself to hate him and she couldn't live loving him. My mother was still standing in front of Pumpkin's grave, her back to me. Quietly, I removed my jeans and hiked up my nightgown. Holding on to his headstone for balance, I urinated over my grandfather's grave." (Of Being Underground and Moving Backwards, 26)

The stories in Underground and Moving Backwards express the unfairnesses of the hard-working working class, at all points it is a social commentary on our unequal society. In the various characters there is loneliness that is somewhat assuaged in the strangeness of slick sexual moments, a carnality without depth. And we find in other stories the pain of the loss of loved ones. This whole world, its delicate and strangely limned or hovering quality, is expressed with a gentle sympathy in astute, crafted prose that is a poetry.

"A large table falls from the ceiling and our host calls us to dinner." (Wind Pudding and Wagon Tracks, 38) "...the strangers she opened her body to, the men whose love was too nervous to dive past the surface of Betty's ocean." (The Trees Turned to Glass, 27) "Her mouth looks like a wet strawberry but when I kiss her it tastes more metallic than sweet." (The Dancing Bear, 15) "He died because he thought our glass window was the world." (Break, 1)

These stories are beautifully written, their jarring images vivid. The paradoxical and hard core of each story is implied, never told. I can see why many of them were published. Babcock is are a master of this form of short story, blunt, poetic, use of inference  - if I may slip into metaphor, roots drugged and dredged with carnal, fertile, polluted earth and yet full of the light of dandelions about to blow away. The emotional textures that emerge from reading the tales are complex, nuanced, not easily defined. Babcock's stories are piercing and yet always tender, gentle, honouring the subjects, full of sympathy for the plight of their strange lives.

"Christina always ate half a jar of peanut butter for breakfast. Weeks ago, in the same newspaper, she had read an article about the unhealthy eating habits of the city's poor." (Half Off, 3) "Betty sighed, filling the bowl with harsh smelling disinfectant before plunging her latex gloved hands in to clean up the mess." (The Trees Turned to Glass, 27) "People watched me sometimes from the outside; their mouths pressed up against the windows like gaping fish." (Of Being Underground and Moving Backwards, 23)

Like the ribbons in corsets, Babcock's stories are tied together with dark narratives, are told through emergences of sharp, strange moments, connections that carry a reflective hallucinated quality, a touching without touching, the whole implied and shown without ever being told. They are written with poetic precision in tightly honed images. There is no excess in this book. I've read it twice and can vouch that Heather Babcock is a brilliant writer and keep her on your list. She's going to be a well known author one day.
____
This collection, a chapbook published by DevilHouse Press in 2015, is sold out. If you find a copy, keep it like a rare jewel.
___ 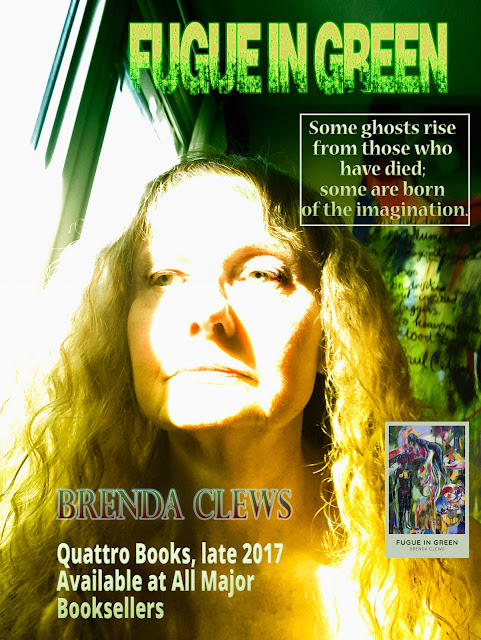 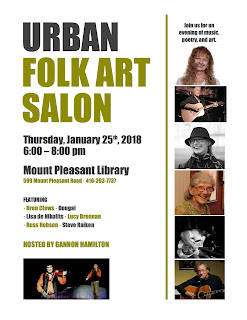 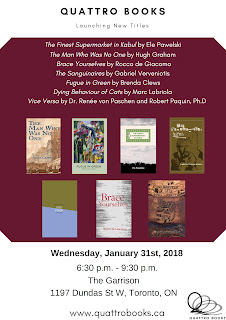 Dance of the Sarong - "I dance a life's struggles."

from the Medusa suite

Some GIFs from my performance of poems from my book, Tidal Fury, 6 Jan 2018 at Linda Stitt's Words and Music Salon at the Tranzac Club in Toronto. Thank you to John Oughton for snapping 'live photos' on my iPhone, which I edited and was able to turn into the weird things you see here.

Sorry for the visual overload! They probably won't all load properly on the page - look at each of them in the lightbox by clicking on the first one, that's best. I'd like to collect them in one place.

If you'd like to buy Tidal Fury, click on the image in the footer, which will take you to a page of booksellers, and quotes from reviews, or here.

The performed poems are, in order, Chthonic, Dance of the Sarong, and a Medusa suite (including Medusa slugging beer!). That final GIF is quite strange, almost a visitation of fairy dust, except, it being Medusa's headdress, these would be snakes. Creepy thought! Enjoy!
___

Fugue in Green at Indigo Books 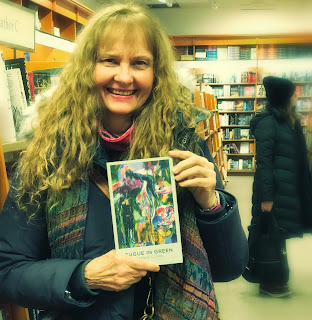 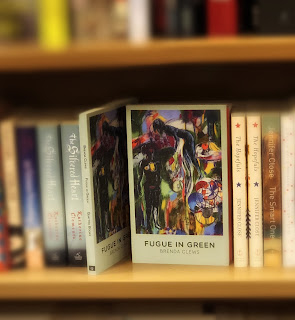 Somehow, it's official when you see it in a bookstore. Fugue in Green, my new novella, at Indigo Bay Bloor! Tomorrow, I will read from it and have some copies for sale too. Come out to Linda Stitt's Words and Music Salon, 12:30-3:30pm, Tranzac Club, Bloor and Brunswick, where I am a feature poet, along with a great line-up, Charlene Jones, Glen Gary, John Charles Daly and Sam Sudar-Singh. The Facebook Event Page is here: https://www.facebook.com/events/1771706859789879/
___ 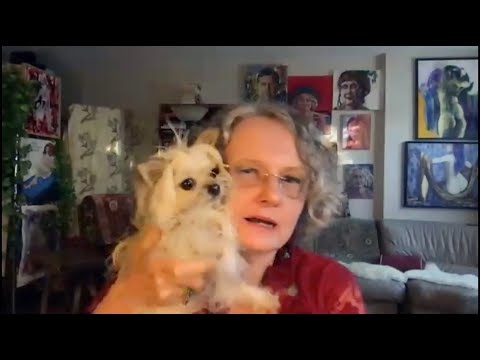