Perhaps I like to prevent the viewer from forming a generalized view of whatever my 'identity-presence' is. Part of this is accomplished through humour, which distances recursively, meaning boomerangs in its iterations. The selves operate this way. We are crowds. You, too, are composed of opposites and different stagnancies and transformations at various speeds in vectors as you focus in this moment, here. How often do we cystalize?

When are we ever all in one place?

At death, perhaps. But, by then, we have fled elsewhere.

So, rehearsals. Preparations for the public show. Experiments, tests, and yet are we not rehearsing every moment of our lives? Learning how to live. In our becoming art?


Rehearsal Two is what I thought I'd like to do. Strong light so you can see only half the face, all black otherwise. Both were shot with the internal iSight camera in the iMac, the first via Photobooth, and the second via iMovie. Not great detail, but ok for test runs.

In some ways I prefer the setting and tone of Rehearsal One, but the Two has a stark simplicity that I like too. Rehearsal Three, a combination of Rehearsal Two and another one I did in Photobooth is a bit strange, and my sense of humour has crept out. It's my favourite, however, and so I put it first.

Above, the link to the first rehearsal, when I hadn't quite memorized the prose poem.

Below, the one I did when I got home on Wednesday night, and that was turned into black and white for Rehearsal Three, up above.

The final version of Voicings is here, and it is similar to Rehearsal Three above, only I didn't obscure the realism of the camera and instead allow myself to be seen.

Where I read the poem on an open stage:

From left to right, Nik Beat, Brenda Clews, Brandon Pitts, ParisK Black, Jennifer Hosein, Tallulah Doll, and Susan Munro... Brandon's book of poetry, Pressure to Sing, was launched, and the rest of us read or recited or sang in an interspersed open stage (between the three book launches)... it was a great afternoon!


Saltwater (2011) from Glenn-emlyn Richards on Vimeo.
A collaboration with poet Eleanor Rees. Reading by Lindsay Rodden.

Between the reader, the poet, and the filmmaker artist, magic occurs. She is like Botticelli's Venus, is that why we are so transfixed? But she is an India ink figure, and not a fine Renaissance painting. The film work, the editing, brings her alive. How does her hair flow with the waves of the saltwater sea? Is it the call of the ocean itself?

Glenn-emlyn Richards had created a one of the finest film poems. I treated a group to a series of video/film poems, only a few, because they tired very quickly - poetry is demanding enough on the page, let alone strung at you in a video where you can't slow down, re-read, consider before moving on - but someone said, the one with the woman, the drawing, the ocean, that one was my favourite. In unison, they all agreed.

The animated images of the video travel like an imaginary documentary with images of the poem, but not with a photorealism. Rather we are in a world of the imagination of our world in both the poem and the film. Art on art. The way we cohere and collect our experiences in the artifice of our art presented without guile, simply.

The simplicity unravels us. We fall in love with the film poem. That one we want to keep, starred, bookmarked. But it passes away, as all things must.

And so I collect it here for you, so you may come back and journey again on the sea of Saltwater.

_
Glenn-emylin Richards, is a graphic designer, English television director, independent film-maker and musician. His films have been shown at many poetry film festivals. He currently lives in Normandy, France: wodum.co.uk/.
Eleanor Rees is an award-winning British poet and teacher of creative writing living in Liverpool. Lindsay Rodden is an Irish actress, playwright and author. 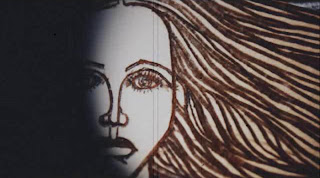 International Day for the Elimination of Violence Against Women

For "International Day for the Elimination of Violence Against Women," which is today, November 25th.