The video I took of Claudio Gaudio's reading at my Poetry Salon at Urban Gallery last Saturday. In the introduction I talk a bit about his novel, Texas, a book I really grokked.

What I did visually in the video is pretty wild, I guess. I mostly had two cameras running and left both images in the video. Yeah, 'art-house' stuff!

It was quite fun to explore doubling, and the use of different textures, colours and lighting in the effects aligned with his 'breath pauses' - in particular, I was intrigued editing this way since I found his excerpt to be very much about 'subjectivities.' So the multiple angles and reflections worked visually as an accompaniment to the reading of the writing.

Also... the video is self-consciously an 'art-house style' with the accoutrements of videoing left in along with the videoed subject who is shown in multiple images - sort of like the thought processes of the narrator of 'I'll be' - the big philosophical ideas and that he likes yogurt, for instance - both the filmed and the filmer, or, in the writing, the thinking, witnessing mind and the experiencer of those moments.

I certainly hope the video works. I do love his philosophic, poetic writing. It's been an interesting challenge to work on this 'art video.' I hope you enjoy it as much I did his reading that afternoon and then working on a 'simulacra' of it.

Photos and Video from the April Poetry Salon @ Urban Gallery

Last Saturday afternoon's Poetry Salon at Urban Gallery was lovely! Except for some equipment malfunction (a video camera mic did not work and so I missed my main feature, Michael Mirolla and two of the open mics), it went beautifully.

Here are some photos and the videos of one of the features and the open mic-ers I managed to salvage (yours truly included). Michael Mirolla and Claudio Gaudio featured, and they were followed by Andrew McLeod (in the blue cap), JD Kruger (in the touque), Margaret Code (with the purple scarf), Jacques Albert (in the leather jacket), Norman Allen (with his painting beside him), and moi. 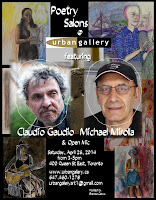 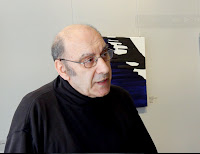 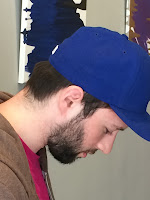 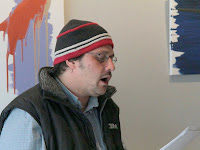 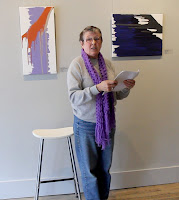 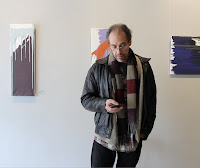 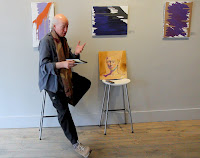 My Video Review of the Readings of the Two Features, Michael Mirolla and Claudio Gaudio:

direct link: Video Review of Michael Mirolla's and Claudio Gaudio's Readings at my Poetry Salon at Urban Gallery on April 26, 2014.

Video of Claudio Gaudio's Reading, One of the Features:


Videos of the Open Mics:


The photograph to which I refer in the 2nd poem, The Understory: 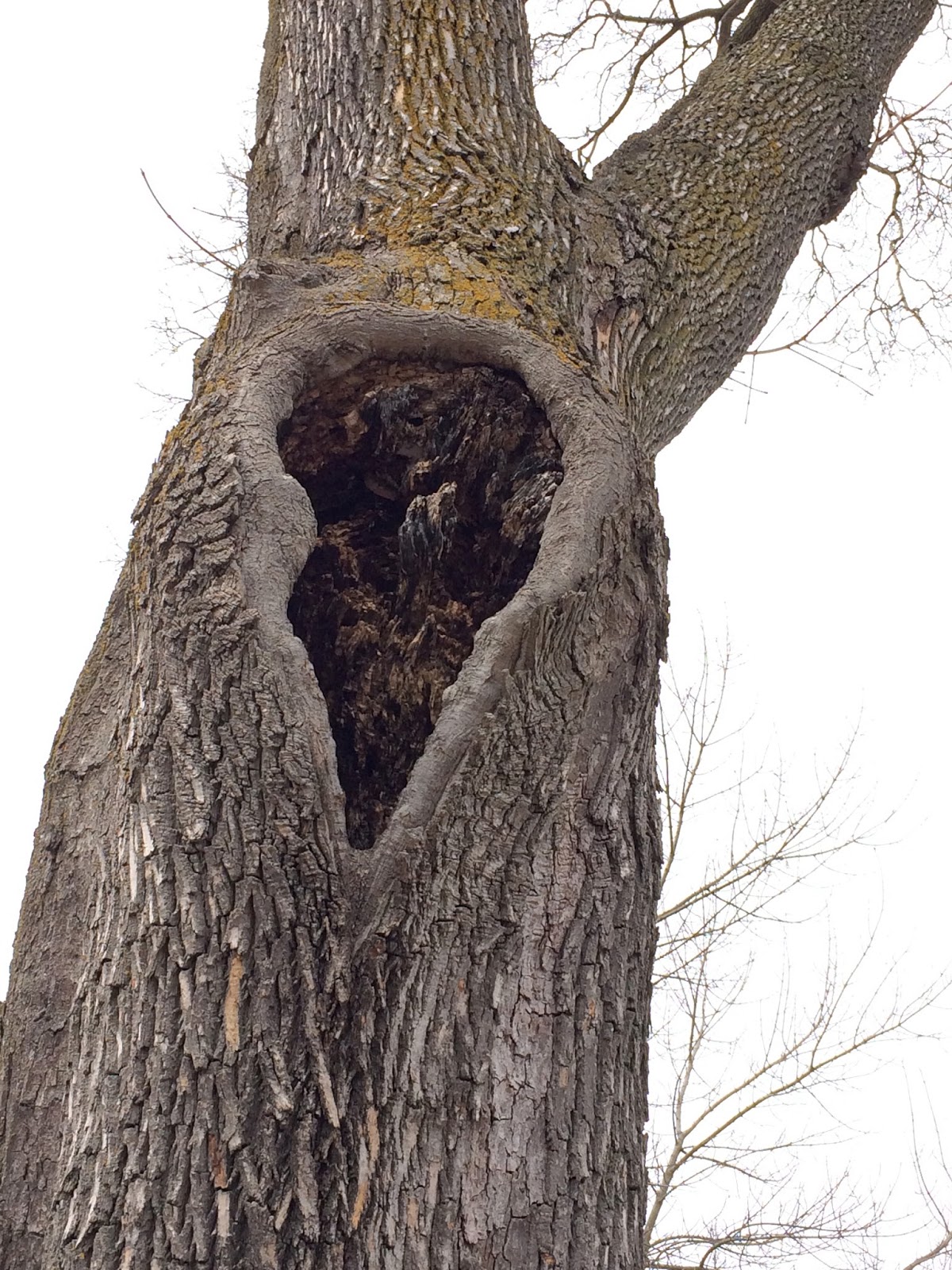 A quick test of the animation feature of Sketchbook Pro. A little unlisted video.

I recorded the finishing of the drawing this sketch on my iPad Mini - the original sketch was begun last weekend.

This technology is incredible. 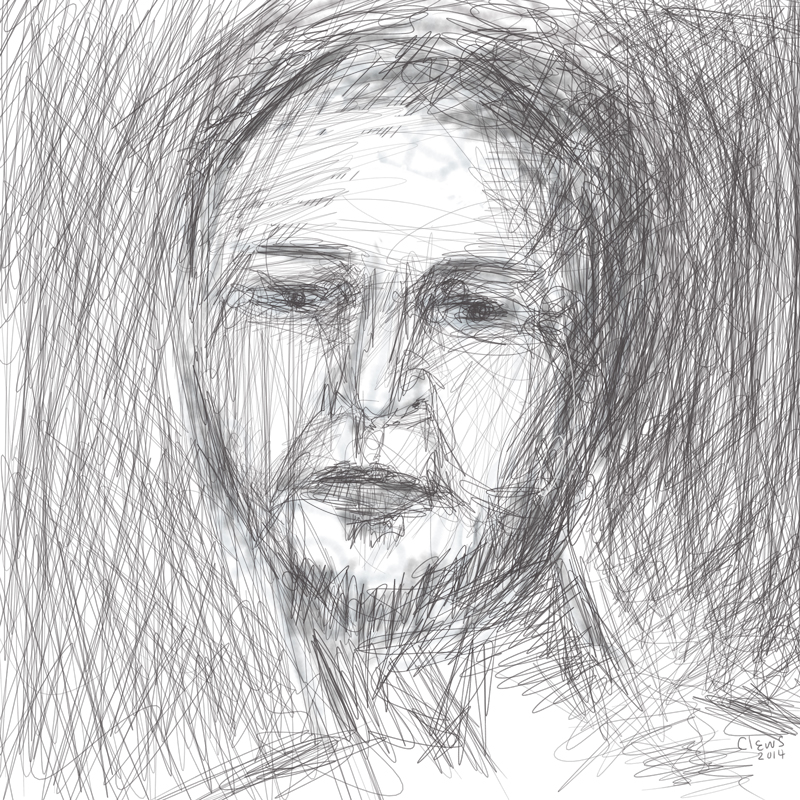 
direct link: My cat joins me while I dance to Pierre Marie Cœdès 'Concerto N°13'

Ok, yeah, I dance in my living room during or after yoga sets a few times a week. My preference is classical music to get the old bones moving and the energy up. When I mentioned in a comment on Facebook to Pierre-Marie that I was planning to dance to his latest concerto, N°13, he replied, "wow, I'm anxious to see that." So I set up a camera and put on his music and with nothing planned, started moving. There is no sound because I inadvertently turned it off when I was attaching an external mic. I downloaded his Concerto from SoundCloud and added the track.

A sweet young feline joins me - she is so adorable! My Aria. Usually she stalks and attacks my ankles when I dance but Pierre-Marie's music seems to have calmed her and she mostly purred.

I added some lighting effects to diminish the busy background and seem to have faded myself out too. Lol. And I left in the times I quizzed the camera. It's all a bit embarrassing. But neva mind!

In the spirit of fun, good exercise, and deep listening, a woman can tromp however she likes alone in her living room.

Pierre-Marie's music is beautiful to dance to. I hadn't heard this Concerto before and so nothing was pre-planned - simply allowing the music to move me. My cat goes for a twirl! She's adorable and loves to get in on the action when I dance.

Pierre-Marie posted the video to his Facebook page with the comment: "Painter, poet, performer, among other things, and she dances too. My Friend Brenda Clews is a thousand facet woman, but first, she is a complete artist, expressing herself from head to toe, and even with her guts if it is necessary to achieve her goal. Nothing stops her… well… no, nothing up to know or to my knowledge. It is he second time she uses my music, just for pleasure here, and I had a 25 minute smile looking at her dancing, her cat wanting to be part of the fun. You are so full of life Brenda, I love you my Friend."

So, like whew! I didn't want him to feel embarrassed that a woman was prancing around her living room/studio to his finely wrought music! And was about to un-list the video, but...

I wrote: "I'm ever so glad you found the video charming in some small way, Pierre-Marie. Of course it doesn't do justice to your music, which I love! I posted it publicly though despite how dumb I look not just because of your beautiful and moving Concerto, but because little Aria stole the show. She is so cute! And I know you love cats... !"

While I continue to test and compose different visual elements for the videopoem I am working on, 'Clay Lady,' this is now a small finished piece.

What I did rather late last night. Suddenly jumped up from my books, poems, drawings and created a scenario - metal leaf background, black cloth, stool, lazy susan, sculpture. Set my DSLR on high speed shooting, started twirling Clay Lady, and then I had a whole bunch of .jpgs. Earlier I had found a YT tutorial on how to make timelapse in FCP X, so imported the photos, fiddled with settings, did some cropping on one series, and ended up with this, which I am quite happy with. Having purchased the cheapest keyboard a local music store sells on sale last summer, I have, now, made myself compose two 'sonic tracks' for videopoems. I can't do music like a musician; I can only create sonics like a poet - thick sound streams full of the unsyncopated. The FCP X titles (which I normally don't use) were a bit of a strain since the background was white but I found some instructions by Googling that explained how to send a title to Motion to adjust it and so managed to delete the white background altogether and then imported it back in. It all took hours of course. I ran out to see the Tanaquil Le Clercq documentary too. Hopefully tonight I can try shooting video and turning that into .jpgs for timelapse just to see how reversing the process might work. I am, in these small projects, working on composing different visual elements for the videopoem I am working on, 'Clay Lady.' 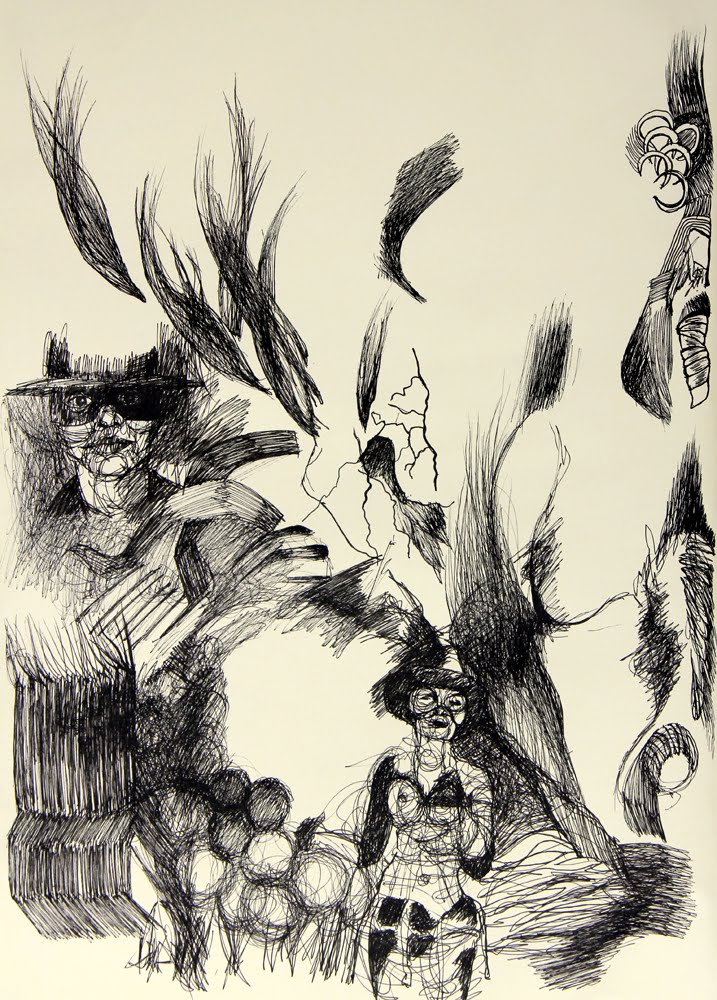 Last night I finally released myself to drawing or perhaps doodling in my big Moleskine, whiling away the hours while I browse the NET, watch art house films, chat with family or friends. This self-permission has taken about a year and a half. Don't ask why. I don't know.
___

It's a Rainy Day and it's Okay

She's an OCADU art student who's exploring stop motion video on her own but she is considering film along with her fine art studies.


direct link: It's a Rainy Day and it's Okay

The footage is Aurelia aurita, shot at Ripley's Aquarium in Toronto.

This time, I did the whole production: wrote the prosepoem, whispered it into the mic, composed the sound textures on a keyboard, shot and edited the video. ©Brenda Clews 2014.

One of my birth pieces, written when I was abandoning an academic stream and moving towards poetry and art ...revised for this videopoem.

On the last Saturday of every month, from 3-5pm, I will be hosting a Poetry Salon at Urban Gallery! We will have 2 or 3 features and of course Open Mic. Please put the recurring date on your calendar.

The next Poetry Salon is on Saturday April 26th. And what a line-up! 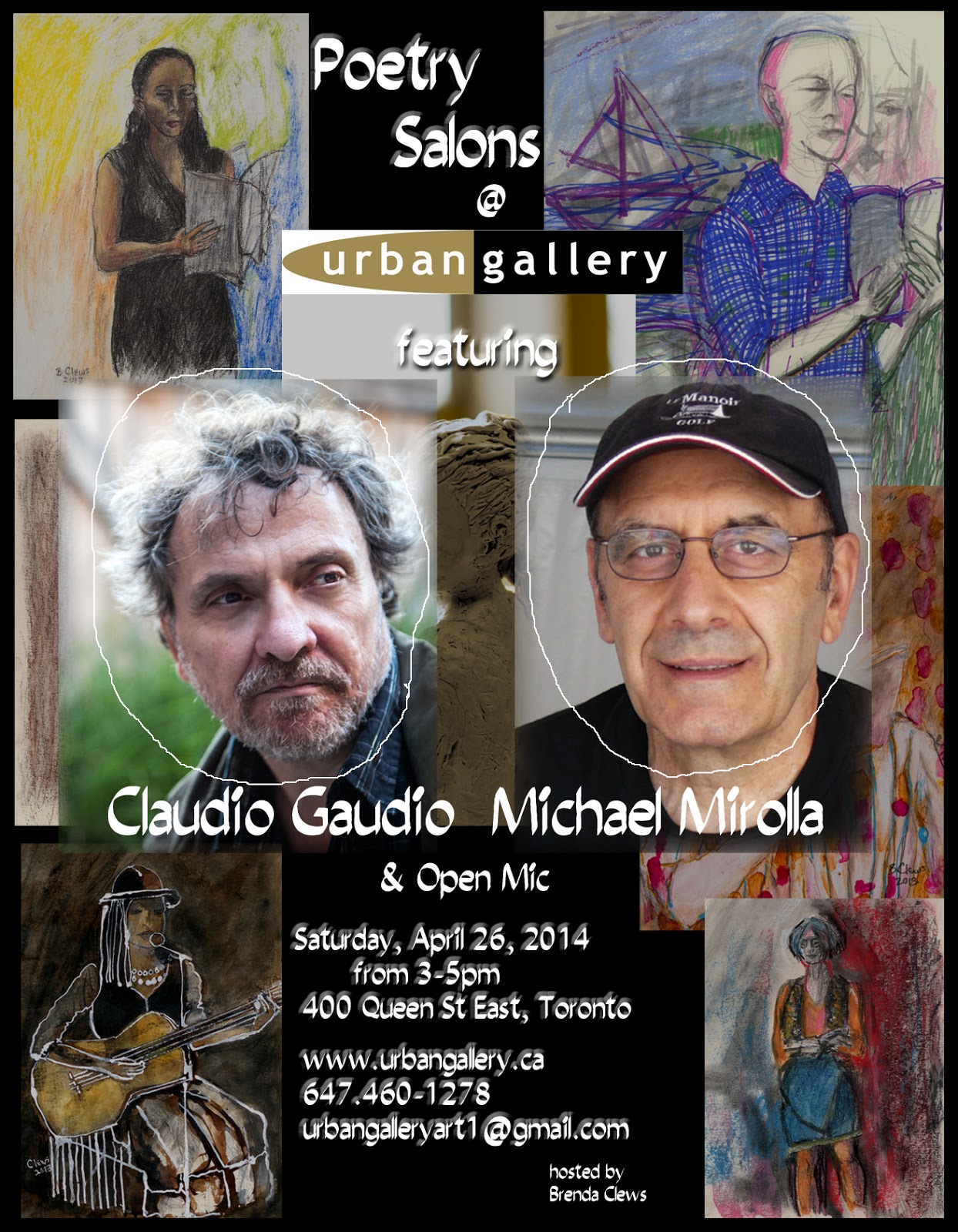 Novelist, short story writer, poet and playwright, Michael Mirolla’s publications include a punk-inspired novella, The Ballad of Martin B.; three novels: Berlin (a Bressani Prize winner and recently translated into Latvian); The Facility, which features among other things a string of cloned Mussolinis; and The Giulio Metaphysics III, a novel/linked short story collection wherein a character named “Giulio” battles for freedom from his own creator; two short story collections: The Formal Logic of Emotion (translated into Italian as La logica formale delle emozioni) and Hothouse Loves & Other Tales; and three collections of poetry: Light and Time, the English-Italian bilingual Interstellar Distances – Distanze Interstellari, and the just published The House on 14th Avenue. A short story collection, Lessons In Relationship Dyads, is scheduled with Red Hen Press in the U.S. His short story, “A Theory of Discontinuous Existence,” was selected for The Journey Prize Anthology, while another short story, “The Sand Flea,” was nominated for the US Pushcart Prize.

Claudio Gaudio is a Toronto based writer born in Calabria. Studied literature and philosophy at York University. “Texas” a novel published by Quattro Books, is currently being translated into Spanish and, excerpted, by Francesco Loriggio to be included in an anthology of Italian Canadian writers to be released in Calabria, by Rubbettino Editore. His work has also appeared in ELQ (Exile Literary Quarterly), Rampike literary magazine and Geist.

A Peek Inside the Palace of Palaces: THE FORBIDDEN CITY at the ROM 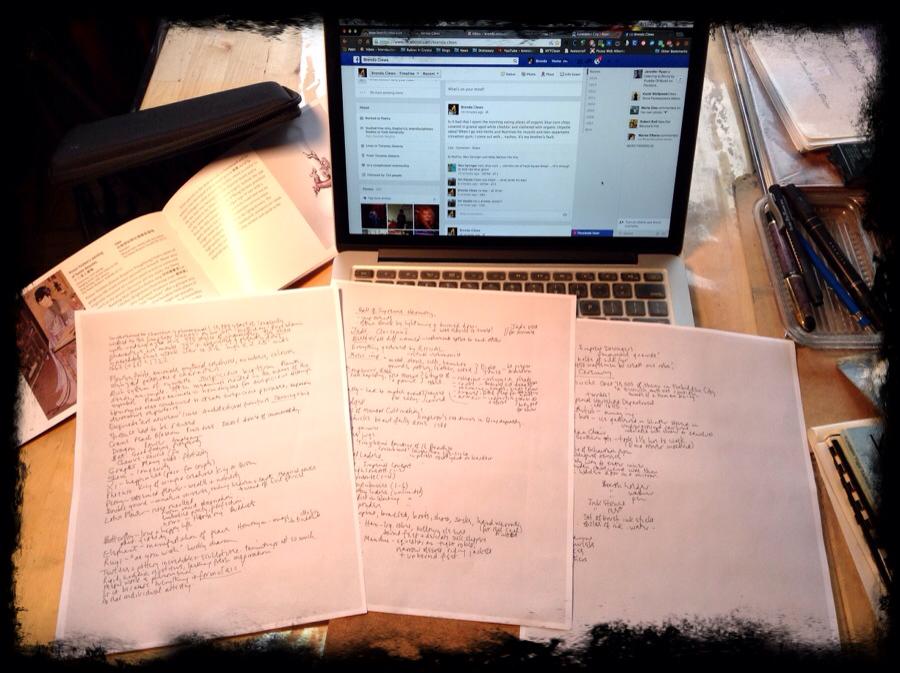 Yeah, one of those nuts that takes 3 pages of hand-written notes on her tablet when she goes to a show at the ROM (you are not allowed to photograph or even draw the exhibits in shows like these - all locked up for the gift shop - you want, you buy - but taking notes is permissible). What you gonna do with me? KJ Mullins kindly accepted an offer to write an article from them for newz4u.net, and it's been published now. I wrote the review far too quickly. But hopefully it works for you. If people who read it go to see the show who might not have otherwise I will be exceptionally happy. It's a fascinating offering from The Forbidden City and well worth seeing.

"How can a museum in another city on another continent show the scope of the riches of the Forbidden City? The ROMs show has 250 treasures from the Forbidden City, of which about 80, including armour, textiles, paintings and calligraphy, have never travelled before. The ROMs choices are sparse against a total of 1.8 million artifacts in Beijing, and attempt to cast a wide net over the art and artifacts of the Palace.

How successful is this appetizer of an offering of the treasures of one of the world’s greatest museums?"

Go read the review, let me know what you think: A Peek Inside the Palace of Palaces: THE FORBIDDEN CITY at the ROM