Ink Ocean is a poem on the Gulf Oil Spill -we hear the lament of the wild through the birds, fish, plants- a poem on us and our ways and on loving in an increasingly polluted world.

Ink Ocean was shot at a live performance at Urban Gallery (where my poempaintings show was - those are mine hanging on the walls) in January 2014. Sick with the flu afterwards, I spent days researching open domain photos and video of the 2010 Gulf Oil Spill and was often in tears at what I saw (like we all were that year). John, who jammed on his guitar to produce a kind of oceanic sonar soundtrack while I performed, said, of an earlier draft version of the video, that he thought I should try to keep the performance/movement the main focus. I decided not to bombard the viewer with graphic images of the oil spill and used various filters to present the photos and video I used so that (hopefully) they became part of the dance itself. We are immersed in the realities we create. Ink Ocean is an activist poem - but not stridently so - rather helping people to hear the cry of the wild and to care and to keep loving ourselves, each other, the world, so that we may all survive. I hope the poem and performance and video open channels of hope, that there are ways through what we are being told by scientists is the world's sixth mass extinction.

John Oughton jams on his electric guitar with his magic box of sounds as a musical accompaniment to the performance: http://library.utoronto.ca/canpoetry/oughton/index.htm

Because I like to draw at poetry readings and many of them are in dark bars where there is not enough room to spread art supplies and there is not enough light to see your page, I started, this weekend, to explore drawing and painting apps on my (smallest, cheapest, non-retina, 2013) iPad Mini (purchased to show Gallery owners my work and it did get me the show at Urban Gallery almost immediately).

All of these sketches were done in each of the apps without looking at, let alone reading, the manuals, instructions or anything else. While I've never used any paint programs, I have used Photoshop for years and so it wasn't hard to figure out an instrument (pencil, pen, crayon, brush), a thickness, a colour. Of all of the programs, Brushes proved to be too hard to figure out - and will require a thorough reading of the manual at some point. I liked the animation video Brushes created of the drawing though I was not able to export it. They are all powerful programs that offer the artist a vast range of drawing and painting options instantly - just open your device, aim your stylus, and go! 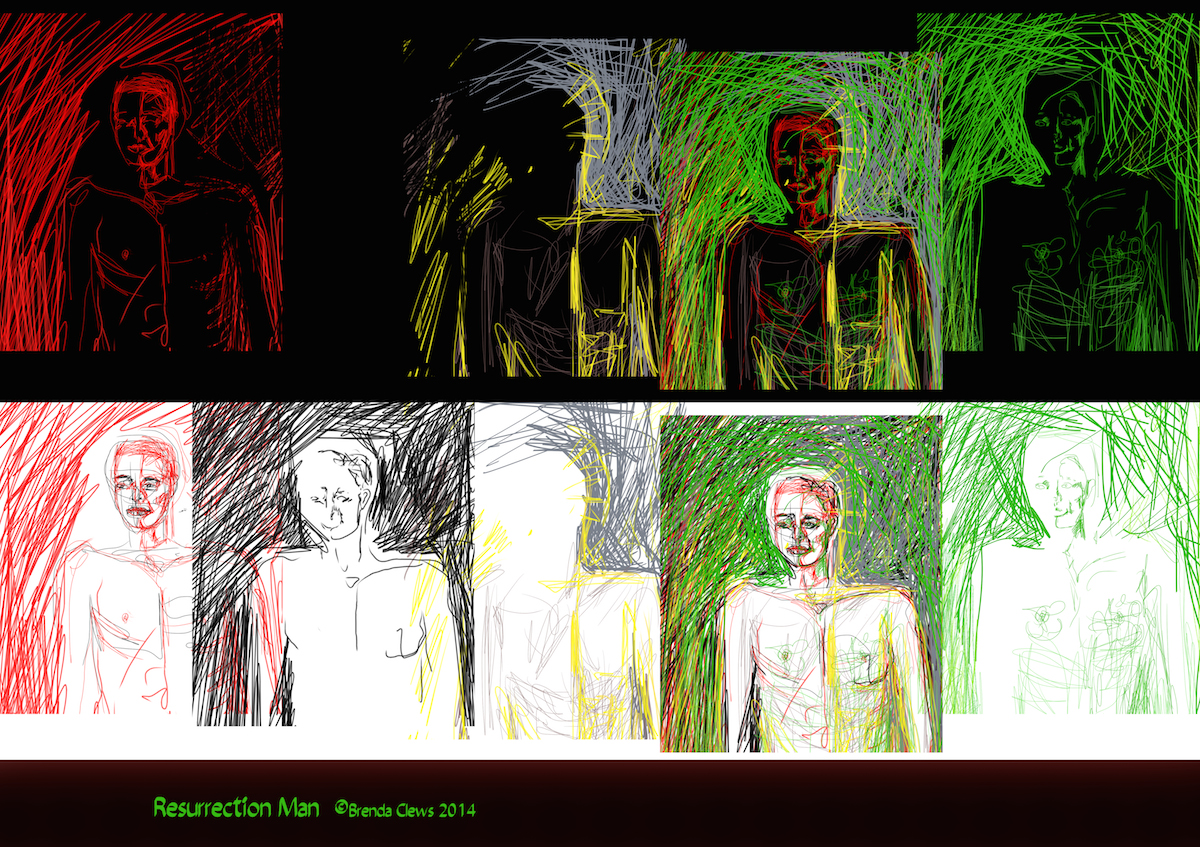 The first one. Entitled Resurrection Man. Drawn in layers in Sketchbook Pro and assembled in Photoshop. 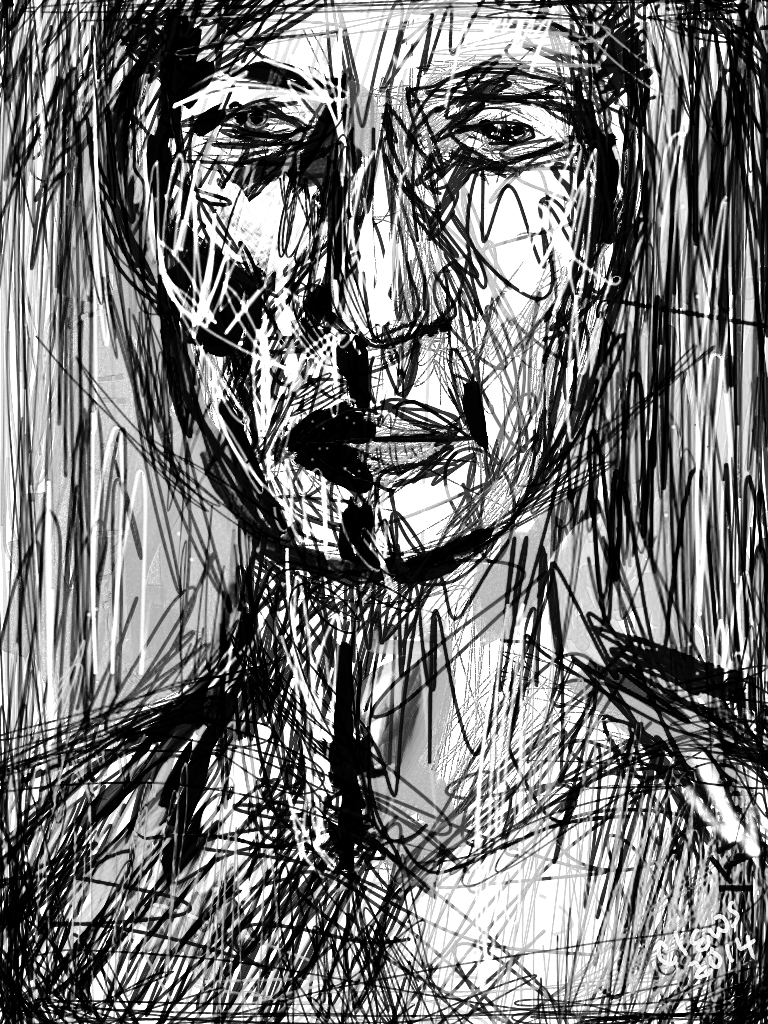 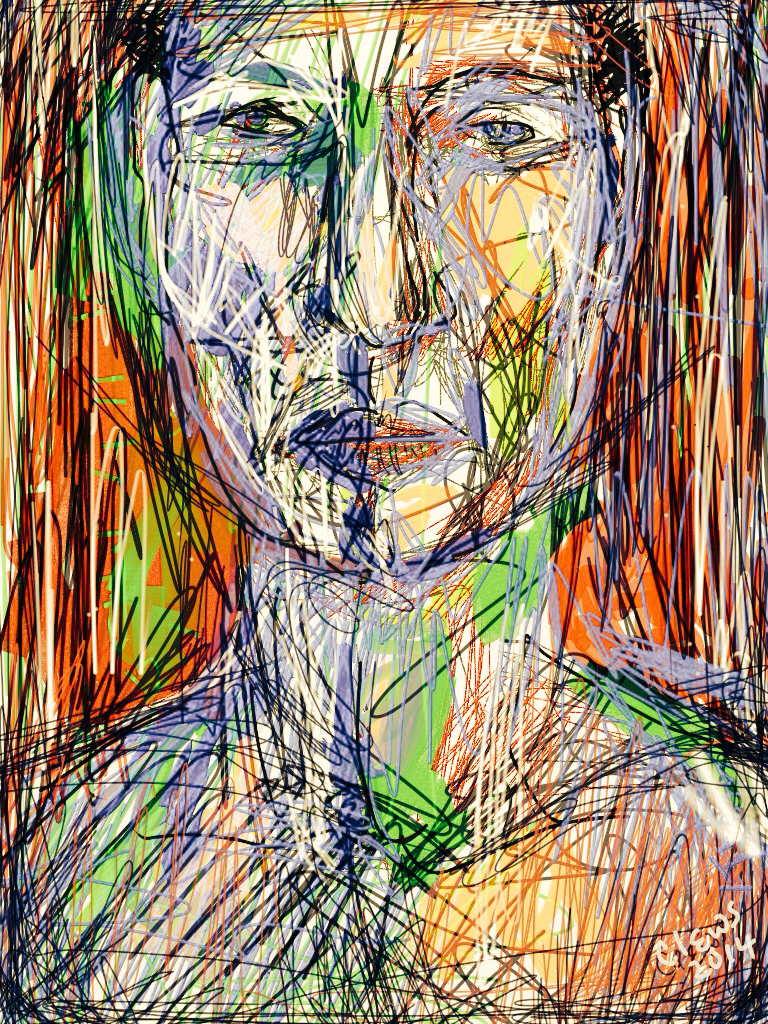 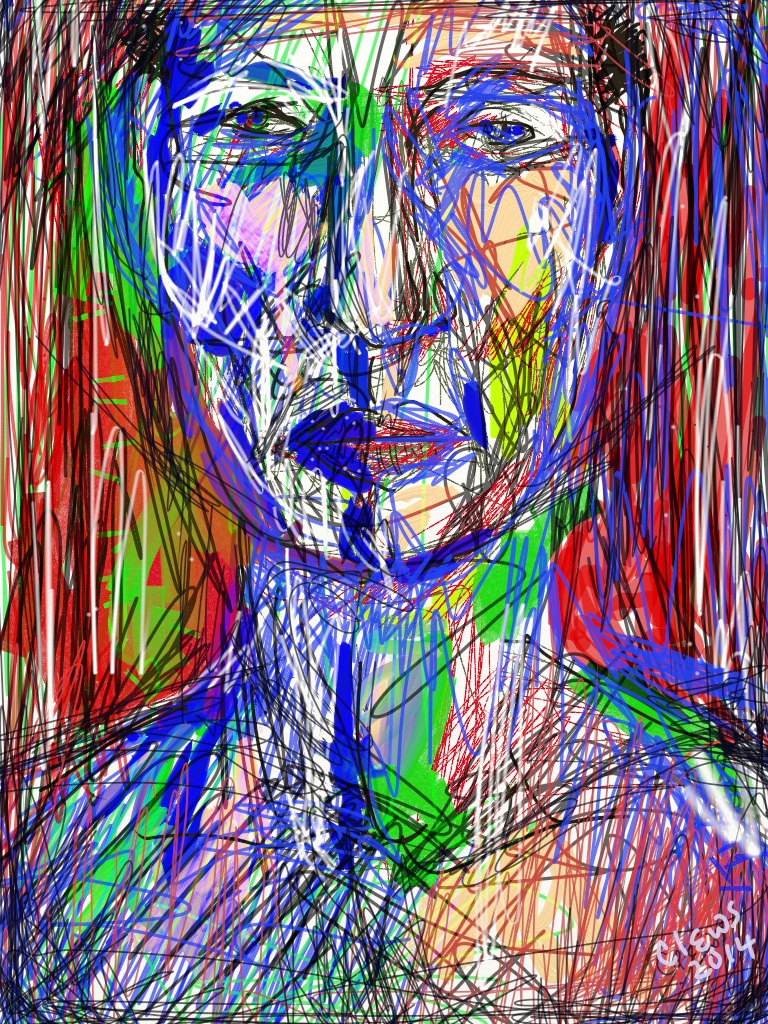 This was done in ArtRage. I like the first two filtered versions, a Noir and a Transfer, better than the original, in which too much blue predominates. 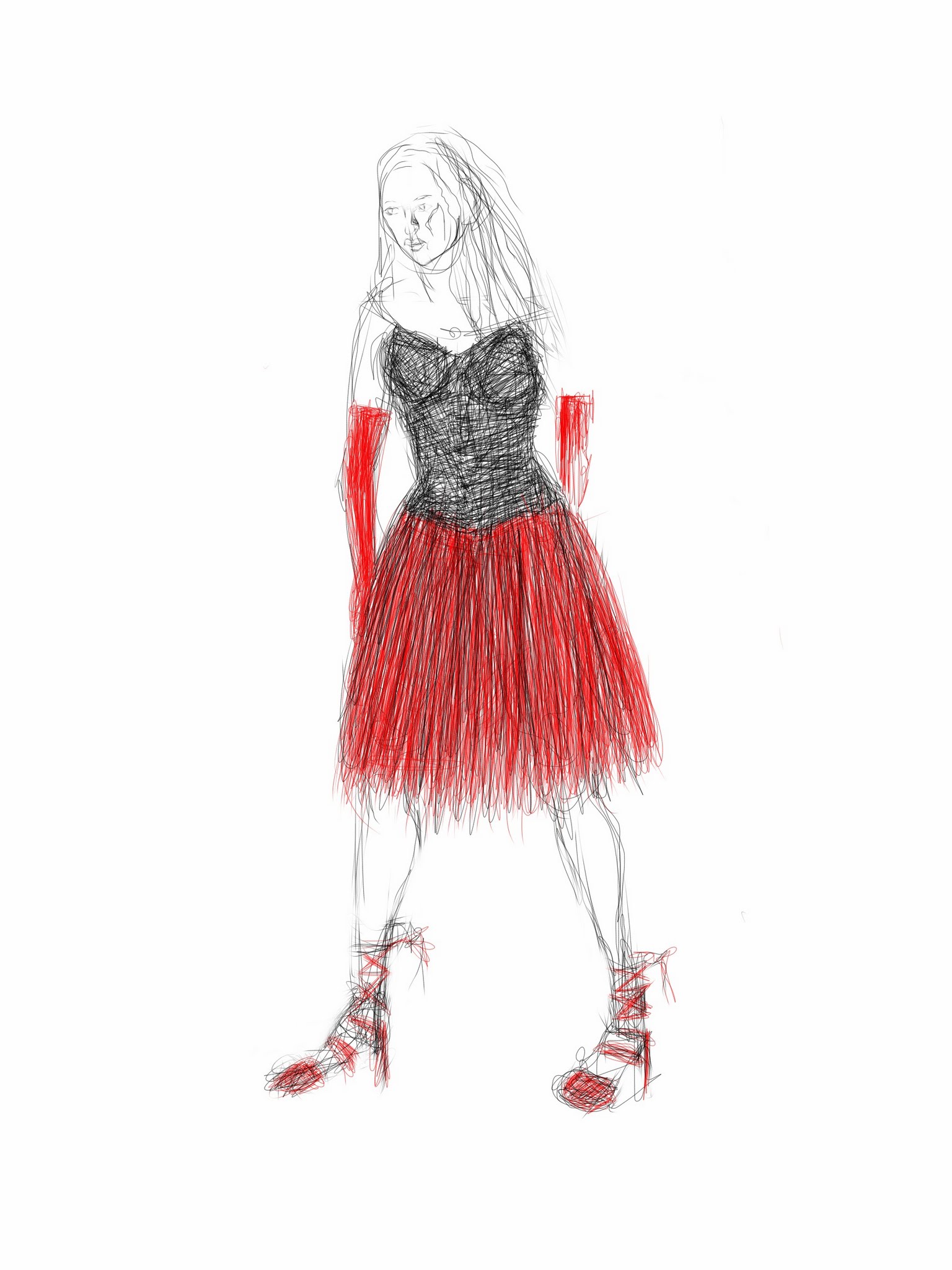 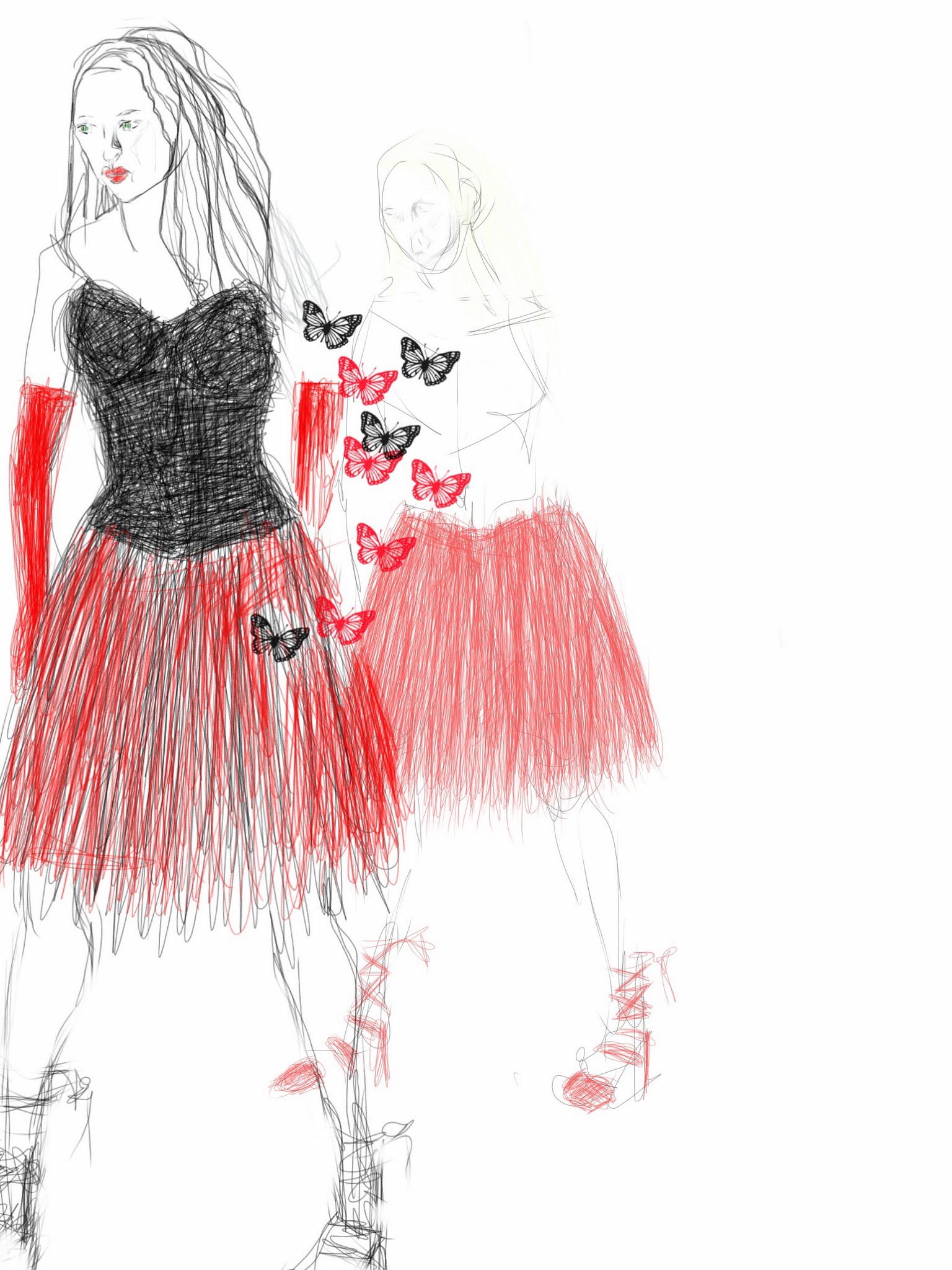 Sketchbook Pro again. Only lines this time (orig to left, separated layers in the final version on the right). Trying to see how best to sketch - there is a short lag, and even then the lines don't always appear on cue. This drawing is a bit wispy for some reason (it wasn't on the device) and easily took three times as long as it would have with pen and paper. Flippantly called, 'Womans In Crinolines.' Digital drawing, any town, any size. 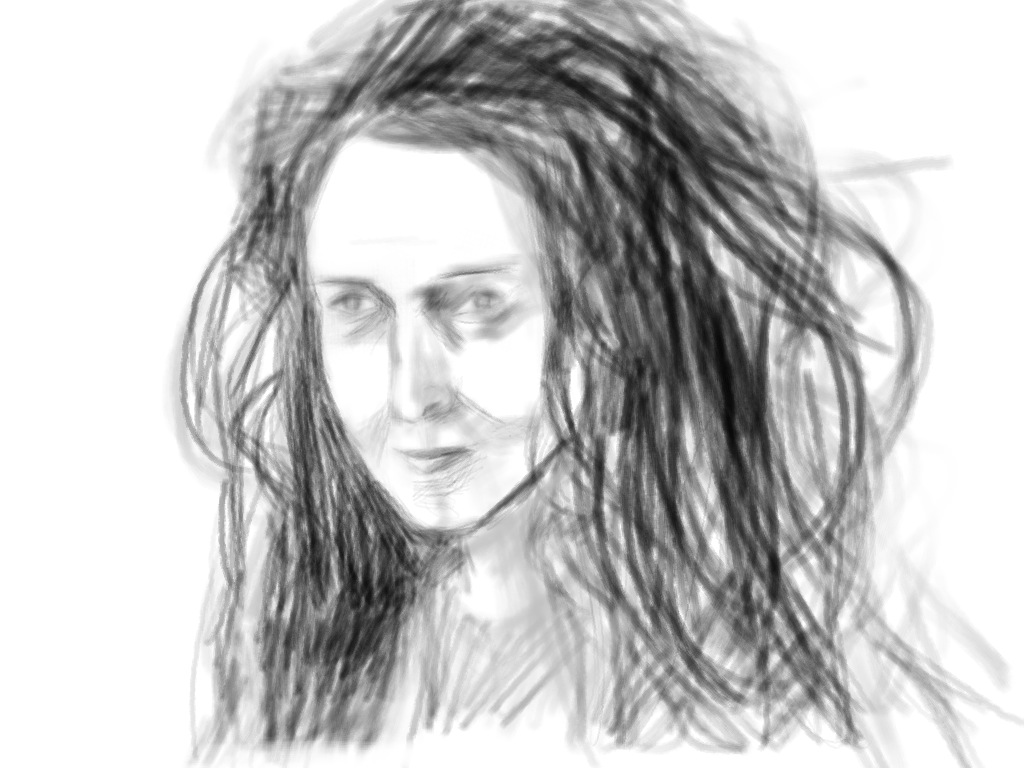 This one is done in Brushes. Now I know Brushes is a powerful paint program but I could hardly get it to work and am thinking it wasn't recognizing my Sensu brush stylus and simply going by pressure. I wasn't, for instance, able to get it to do detailed eyes - it just ignored my repeatedly laying down lines. While I like Brushes, I realize it's going to be (another, sigh) learning curve. 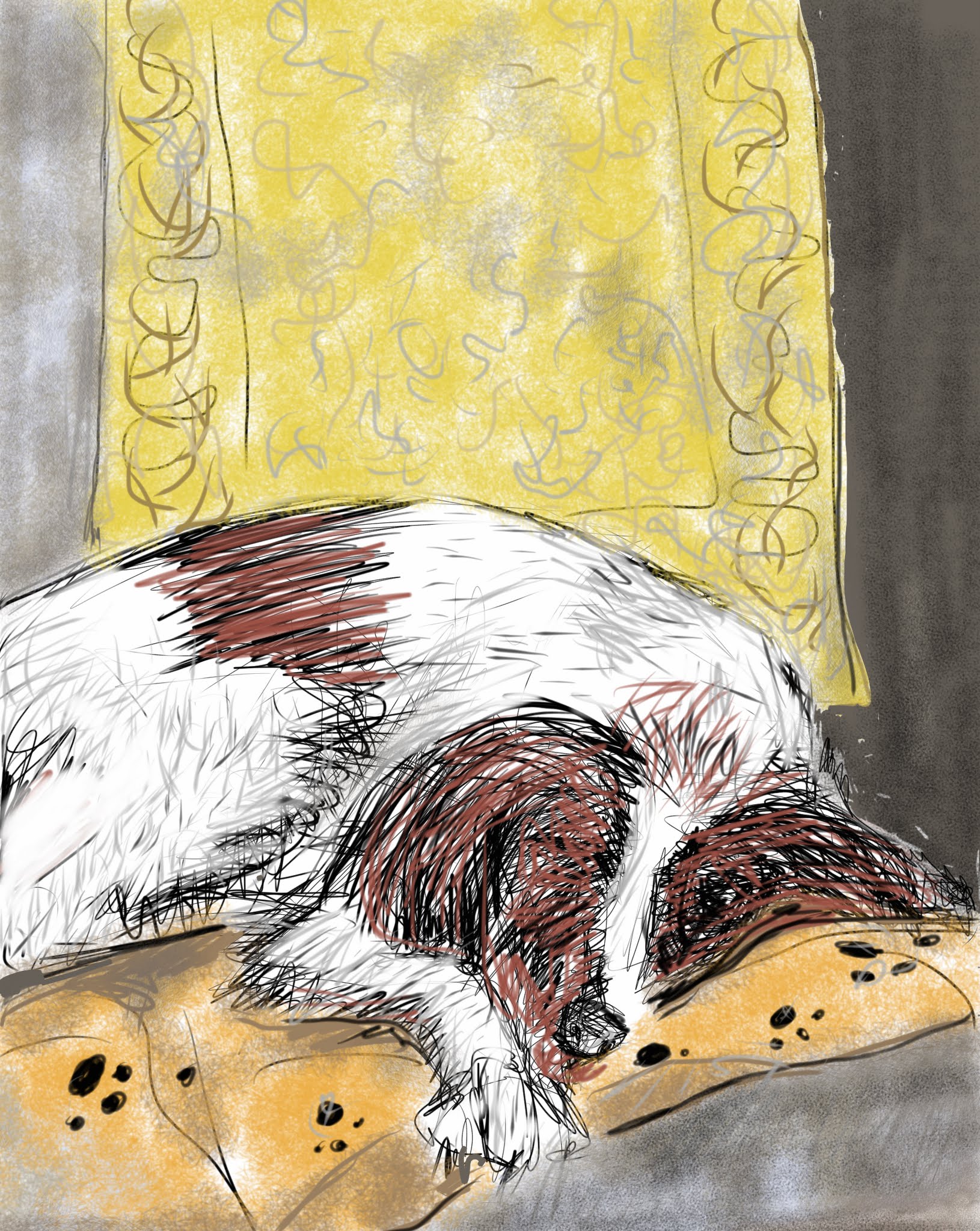 Not my best one so far, and it definitely looks 'digital' - no variations in line thickness, etc. -sort of like a marker drawing. Done in Sketchbook Pro with a stylus with a nib, the Adonit Jot Pro, which was much more responsive than the Sensu brush. My doggy after her walk today. Snooze time! :)]

This one was done in ProCreate with the Adonit Jot Pro stylus. The original is on the right, and the splitting of the layers was done in Photoshop on my Macbook Pro. (Yes, these programs will export a .psd file.) When I shifted the layers, 'he' went from being a man to a 'woman.' Intersex. Transgender. In and out of drag. Or 'she' is a woman who becomes a 'man.'  Intermeshed. Fluidities of gender.

Last night at our Ren Rev poetry workshop I tried to draw Norman Bethune and my lines were so hesitant and wispy, I see I have a long way to go. He was very sweet, and said he liked the sketch but learning how to draw digitally - at least 200 hours he estimated. And the final layer I drew, without which the sketch is pointless, has simply disappeared. It was there when I showed him last night; it's entirely gone this morning. I thought closing the app meant an automatic save (there are no save buttons anyhow). Apparently not. Can't get an answer Googling the issue either. Time to read the manual, I guess.

Having been at it only a few days, I'm not doing too badly (except for Norman's sweater and eyebrows, which disappeared).

I sold a painting!! Gone to a good home! I'm so happy! 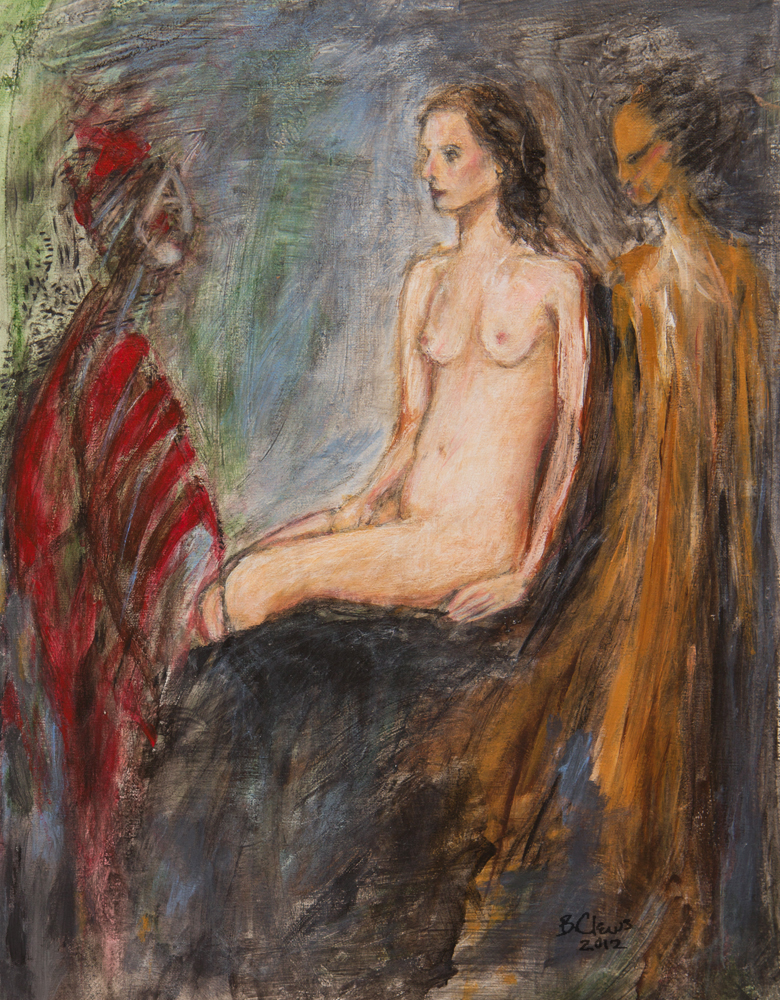 "Every Angel is terror. And yet, ah,
knowing you, I invoke you, almost deadly
birds of the soul" from Rilke, 2nd Duino Elegy
___

Ink Ocean: A Video of a Live Performance with Images and Videos from the Gulf Oil Spill Added.

It's my birthday, and I won't tell you how old I am, but I did get this video finished finally. The last step was subtitling it, and got that done by 11pm. I worked long and hard on this video of a performance I did at Urban Gallery on January 30th, and hope you take away something of the sadness and outrage over the Gulf Oil Spill and what we are doing to our world even as we have to continue loving in an increasingly polluted world...

Brenda Clews performs her poem, Ink Ocean, live at Urban Gallery in Toronto during a Performance Poetry Salon she organized there during her Poempaintings show in 2014. http://brendaclews.com; http://urbangallery.ca

John Oughton plays his electric guitar with his magic box of sounds: http://library.utoronto.ca/canpoetry/oughton/index.htm

All the extra clips (except for the drawing, see below) are from public domain video and photographs of the Deepwater Horizon Gulf oil spill in 2010.

'Ink Ocean' is about the oil spill that occurred in the Gulf of Mexico in 2010 when nearly 5 million barrels, or 210 million gallons, of crude oil were spilled into the sea due to an explosion of an off-shore drilling rig. It remains the largest marine spill in the history of the petroleum industry.

Over 5 months, hydro-carbon eating bacteria devoured 200,000 tons of oil and natural gas in the Gulf, and then stopped. Despite the massive cleaning efforts by the oil industry and governments, and the efforts of the bacteria, as of 2012, 40% of the spill remains in the waters.

This prose poem began as writing in an ink drawing (included in the video, the actual drawing is pictured in the credits). It took 6 - 8 months to finish, and was revised in preparation for a reading in 2012. It is an experimental poem structurally. A poem of utterance, of cross-currents and paradoxes. It is composed of different voices, and perspective shifts. The crude oil spilling in the ocean forms words. The poem arose out of a drawing in black ink, an ink that became a central shifting, drifting, writing, spilling, seeping metaphor in the poem on the oil spill.

For those fun sun lovers who go south each winter, some photos: our beach; our beach with what-appears-to-be a swarm of fireflies; and a selfie in a beach cover-up that keeps all the uv rays off - if I appear a little bright-eyed it's because I took the Ray-Bans off and am blinking in the flood of sunlight. The dog also has a special beach cover-up in the first photo that protects her against harmful uv rays. You can't be too careful on the beach! 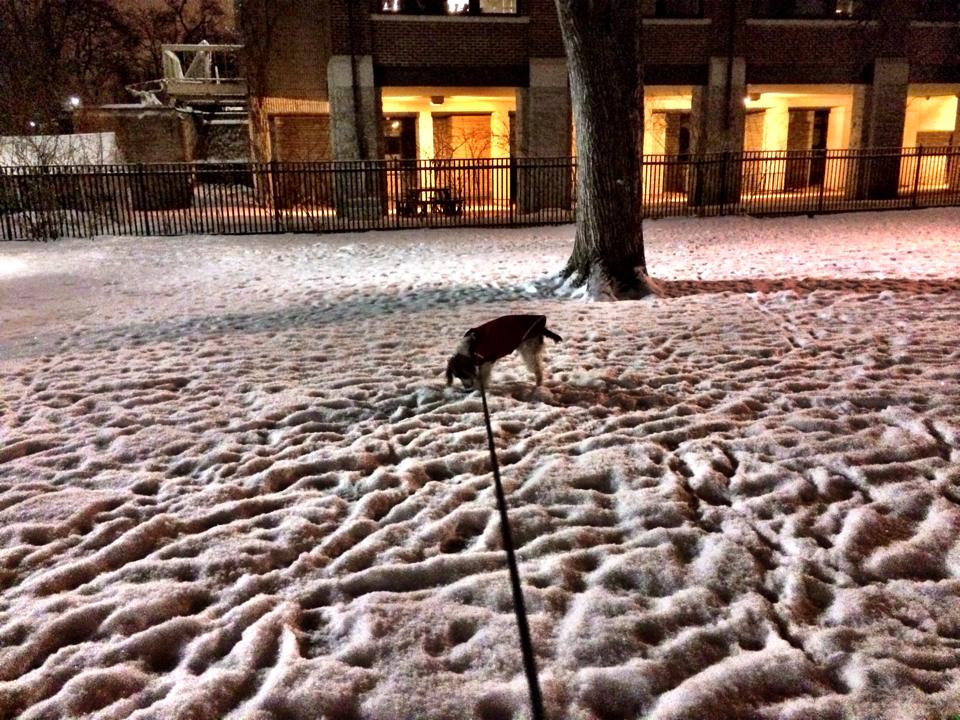 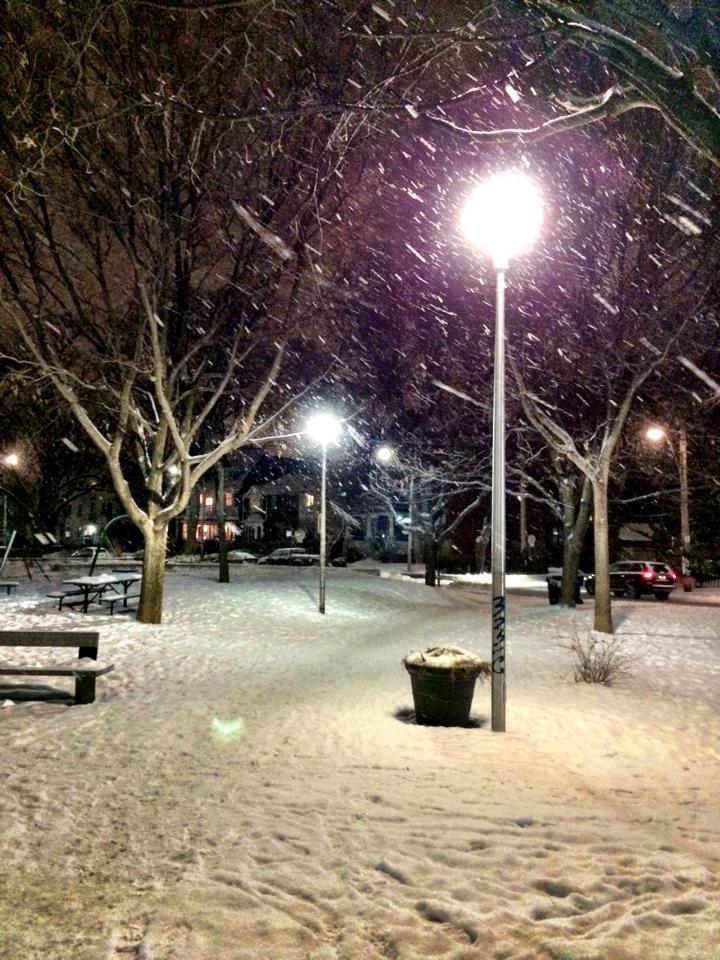 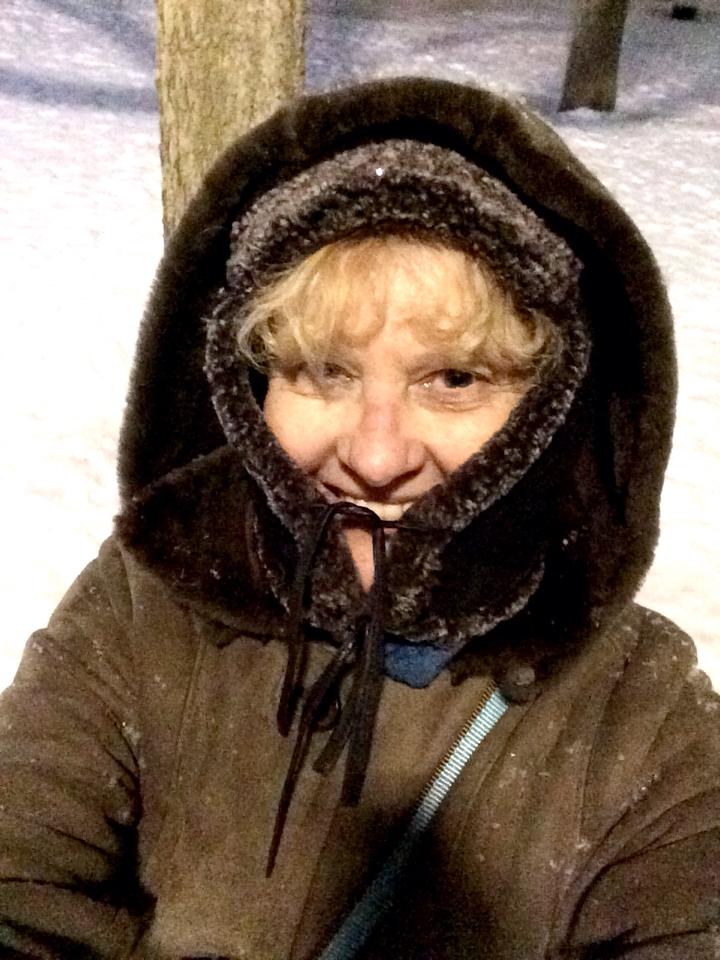