Our March 2016 Poetry and Music Salon at Palmerston Library Theatre was superb. What a line-up of talent and warmth, I am so lucky to receive such a gift every month!

The EMU men, Luciano Iacobelli and Robert Marra, were extraordinary, and crazy hilarious. Margaret Christakos brought her elegant, mellifluous speaking voice to her poems and writings, giving her fertile work resonances that you might not find reading on the page - always such a treat to hear her. And Tom Gannon Hamilton, breaking our hearts with his violin or making them sing, he's our Pied Piper, and you should follow him around the city wherever he plays, and he read poems of opening to Spring, love poems.

High quality on the open mic too - Stanley Fefferman's writing is amazing, wowed by Victoria Lidia Ilgacs, gentle and beautiful Daniela Chis' writing is like her, Kirk Felix recited a poem that became a song with his guitar, his very first poemsong, that he wrote in 1970, called, "Christine," and he was accompanied by Tom on the violin. After the break, Margaret Code took the stage, love that woman, she is on a mission to save the Art Bar, at least in a resurrected form, and so please contact her if you would like to be on the save-the-Art-Bar committee. Finishing up the open stage were two performance poets, and how I love them both - Sahara Spracklin, a lady with her own style of poetry and song, and Stedmond Pardy, one of my favourites.

Thank you everyone who performed, and thank you to our audience! Especially I'd like to thank Iana Georgieva-Kaluba, the librarian at Palmerston Public Library who has been extremely supportive of a poetry and music afternoon at the library and who helped to organize this event and promoted it throughout the library system. The sound technician, whose name I did not get, was very helpful and did the mic levels, showed the videos on cue, and simply helped us to have a superlative Salon.

Many thanks folks for being such blessings. Love you all. xoxo

Here are the photos I took. These are mostly from the video since, without a background of artwork and daylight and the angles those differences afford, the photos looked just like the video and so that saved me some extra work. For names, please go to the album on Google Photos. 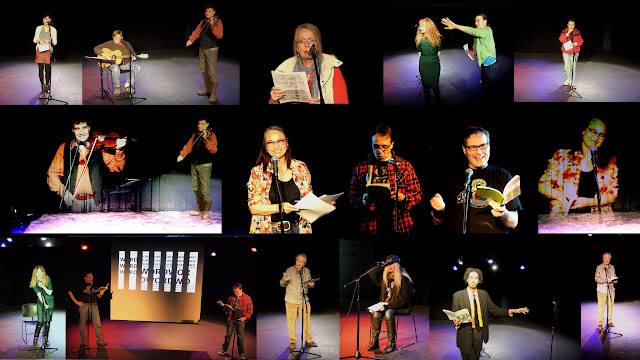 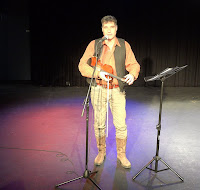 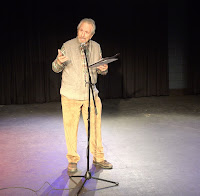 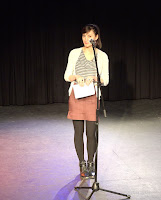 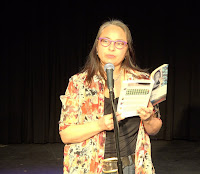 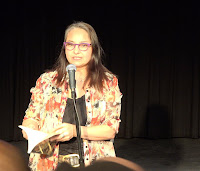 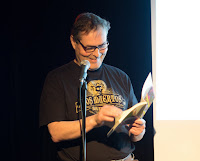 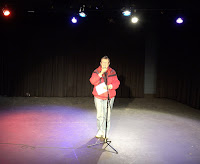 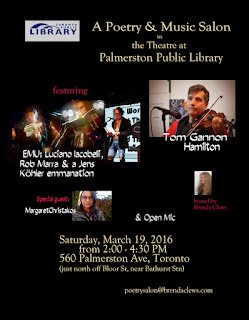 If you missed the March Poetry and Music Salon, why there is a video! - good to listen to while you do other stuff, plus you can see the poet or musician too. I think everyone looks great in the light against the dark background. Palmerston Library Theatre is a marvelous performance space.

In order of appearance:

Of the EMU Dialogues, it is said: "Emu is a literary cult named after a bird improvised from the spare parts of other birds, a bird that never flies because flying is a cliché. Emu is I AM YOU AND YOU ARE ME spoken at the speed of light. Emu is literature’s barber shop, where Dadaism, Surrealism, L-A-N-G-U-A-G-E get their weltanschauung trimmed and catch up on the latest sports gossip. The Emu Dialogues is a book for anyone who was ever asked the question, “why is an Orange?” and answered “because ice cream has no bones!”

ROBERT MARRA is an author, visual artist, psychotherapist. He is the author of a long concrete poem entitled THE WORD (Lyricalmyrical Press). Often combining words and images, he has shown his painting in various spaces throughout Toronto. The Emu Dialogue’s is the first major appearance of Robert’s literary work.

MARGARET CHRISTAKOS has published nine collections of poetry, including Multitudes (2013), Welling (2010; A Globe100 book), Sooner (2005; a Pat Lowther Memorial Award nominee), and Excessive Love Prostheses (2002; winner of a ReLit Award), as well as a novel, Charisma (2000; a Trillium Book Award nominee). Christakos designed and facilitated Influency: A Toronto Poetry Salon from 2006 to 2012 and was Canada Council Writer in Residence at the University of Windsor (2004-05).

THOMAS GANNON HAMILTON is a poet, violinist and producer. He wrote his Masters thesis on "dub poetry" (1985), before humanitarian work took him to Central America, where he joined the Salvadoran artist's cooperative "Tizon.” After relocating to Calgary, he completed a doctoral degree focused on the experiences and practices of high school poets. He has published two e-books of poetry, "Bellicose Veins" and "Deer Crossing.” He now lives in Toronto, where he performs regularly.

On the Edge of An Abstraction, a drawing 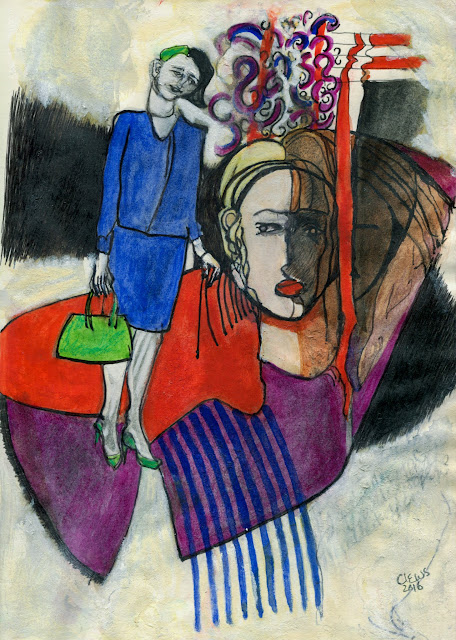 Watching House of Cards (shivers! the ruthlessness of it all but the acting! Kevin Spacey and Robin Wright are brilliant) and doodling - this is what it is. It seems like there might be a story in it. I was also thinking of a Muriel Rukeyser quote (which is, in fact, written in there and then blotted out), "If one woman told the truth about her life? The world would split open." On the Edge of An Abstraction, 21cm x 29.7cm, 8.25" x 11.75", multi-media in Moleskine Sketchbook. © Brenda Clews 2016.

With thanks to Jean Morris for her comment on Facebook which led me to a title for this drawing.
___ 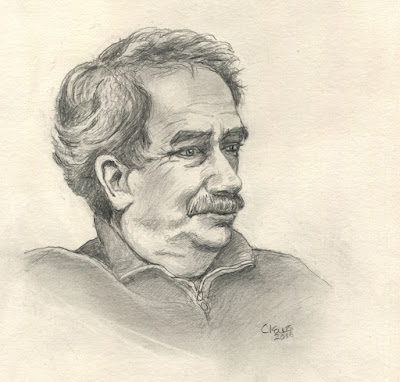 Watercolour Sketch of my Cat 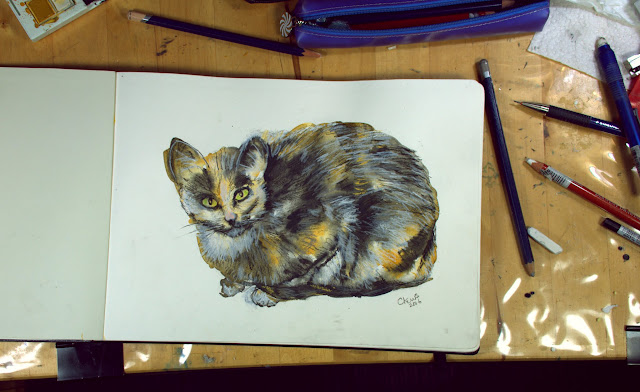 ...just a sketch. Watercolour and charcoal on watercolour paper. Did a little something that took an hour or so tonight for testing archival varnish sprays. Aria, my kitty. In a Moleskine Art Plus Watercolor Album, A4, 12" x 8.5" © Brenda Clews 2016.
___ 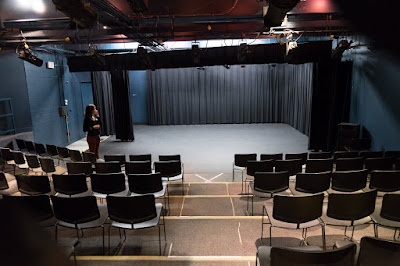 Breaking News! My next Poetry and Music Salon will be held in the Palmerston Library Theatre! It will be on the last Saturday of March break, March 19th, from 2-4pm or so, at 560 Palmerston Ave (just north of Bloor near Bathurst Stn). A brilliant afternoon. Tom Gannon Hamilton will play violin for half an hour (so beautiful). Luciano Iacobelli and Robert Marra will wow us with an EMU reading (you should not miss this- it's like taking some kind of unknown drugs). And the lady of lyrical streaming poetry, Margaret Christakos is our special guest poet. It's FREE, with pass-the-hat for the features. Here is a photo I took of the theatre - it seats 120, so do come out if you can. I'll be making organic hot apple cider too! 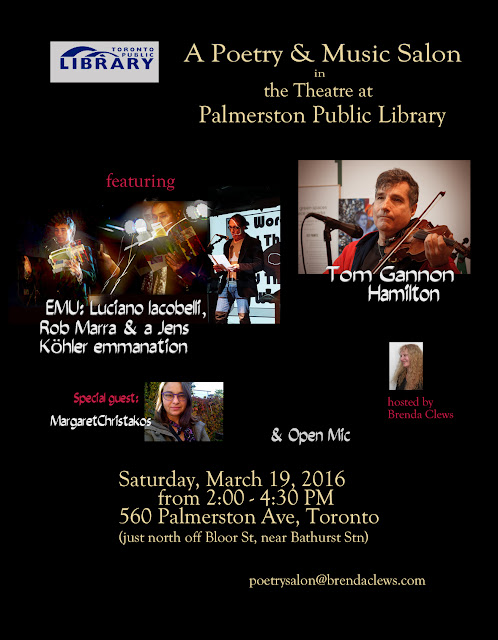