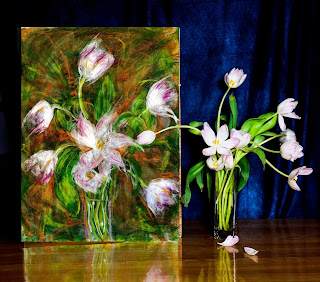 An open studio that my friend Erica is offering. I had no idea what I’d do this time. Sometimes showing up and allowing the inspiration of the moment is the way to go. Grabbed this and that and a chalk pastel and Taylor’s chalk of tulips wilded on paper. No plans to keep the pastel which will go out with the tulips, but they make an interesting photograph. 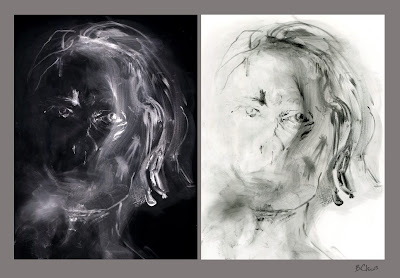 Drawn with graphite putty and a 4B pencil on yupo paper an hour or so ago.
__

This began with an image of memory scrawled in a notebook in April 2019 that I knew I would work with, either in a poem, or perhaps video. That note, 'memories carved on other memories like archeological layers that disintegrate, losing their definition under the press of time,' evolved into this filmsoundpoem of at least 50 layers all wrapped into each other as they dissolve.

In May 2020, I took some clips on a hike that struck me as interesting and began to edit them. Then I expanded the original journal fragment into a page of repeating phrases that were then written onto a new page, edited and spoken as a sound poem of repeating tracks (as part of a series of short soundpoems I'm working on). That final scratched-out page is placed on screen - we love to see other writer's processes.*

The sheer number of compound images rolled into compound images in this video pushed my hardworking computer to its limit and eventually I simply had to stop, create some handwritten titles and credits, and let this little oceanic memory poem skip out on the waves.

I would like to thank my dear companions, Kate Rogers, Dai Evans and John Oughton for a hike on May 16, 2020 in Presqu'ile Provincial Park near Prince Edward County in Ontario where the lapping beach clips were shot.

As ever, this is a one-woman production - soundpoem, video, voices, editing, everything except of course my friend John, who skipped a stone on Lake Ontario, was done by moi, for better or worse.

https://brendaclews.com
__
*Archeology of Water, it seems in retrospect, though different in style, follows from a videopoem I worked on between 2014-2018 called Ink Ocean, a poem which emerged from a drawing into which I had written the beginnings of the poem. Here is an older official version based on a 2014 performance, with the drawing in it, Ink Ocean, and here is a newer more free-form performance that I quite like, Ink Ocean.
___

"I'd dance to death to evoke it." "Who in me writes?"
It was a rich, varied poetry evening where we read, talked about process, and asked questions. I'm still integrating what everyone said. An evening of inspiration. I would like to thank my features, Elana Wolff, Michael Mirolla, Margaret Christakos and Jeff Cottrill for their superlative poems, readings and expressions of inspiration. And for our fabulous, talented audience! You all added your creative energy to this dynamic event. Thank you, one and all! 💗

The drill order:
I open with a pre-amble, then read/perform a prose poem, 'Pull Down the Northern Lights for Chandeliers,' about breaking through a writing block of 9 years, followed by a Q & A. Elana Wolff and Michael Mirolla each read a poem and talk about their writing process. There is a 15min break, where discussion ensues. Margaret Christakos, and Jeff Cottrill each read a poem and talk about process. We end with an open discussion with feedback on poems and writing processes. My hope is that writers who watch come away inspired, and thinking about how best to continue writing in the ways they most wish.
Timestamps:

I would like to thank the League of Canadian Poets & Toronto Literary Council for funding for this event.
___

Crawling Out of the Morass

A preliminary sketch that I hope to work on in the coming days. Photo with electric light during a dark thunderstorm. Self-portrait, stick and water-soluble graphite, 20"x26". Crawling out from a deeply troubling family crisis.

The Book of Night Women by Marlon James

Today I am silent. Between The Book of Night Women, by Marlon James, and the ballet dancer, Sergei Polunin, who I watch on YouTube. One, grippingly violent, a story of the slave trade in Jamaica, in beautiful prose, in a seamless, perfect and mesmerizing dialect; the other, one the best dancers in the world, spins and leaps that are superhuman, a force de majeure, but shy, introverted, a rebel and a visionary. I float through a heatwave, basking in humidity. Sitting on a bench with my cat, I stare at the foliage and sky, the green, until I am saturated with heat and the healing of trees. Later in the evening, I buy the 2017 documentary on Sergei, The Dancer. I am living in Lilith’s world where she defended herself violently against rape. There has been blood in my mouth since that scene. I had to put the book down because I am living in that hut with her and her burned, skinned-alive would be rapist. I fall asleep dreaming of pirouettes.
___

The Salt of the Earth, directed by Wim Wenders, Juliano Ribeiro Salgado

The Salt of the Earth, directed by Wim Wenders, Juliano Ribeiro Salgado. France, 2014.

Rich blacks, almost coppery greys, luminosities of light, whites sheer like silk shining, Salgado's work, grandeur, a vast scale. In his humanity, we see the terror of us, how we are victim to our own cruelties. His golddiggers, a hive of ants in the pit, farmers, dying Rwandans, Ethiopian skeletal peoples, the genocide of the Serbs, burning oil fields in Kuwait, on land, water, air, ice, in forests, mud plains, cities, deserts, he paints landscapes of pain or of beauty. When he cannot contain the pain anymore, retreats into existential despair, his wife, Leila, who was with him in spirit on every project in every part of the world while at home with their children, a true curator, guide, turns their focus to healing through affirmation of the beauty of the planet, to re-planting their denuded rainforest in Brazil, to documenting the diversity and beauty of animals, birds & insects of the world. The film ends with renewal, resurgence, regeneration, a joy, transcendent. Of a mountainous desert alive with two and a half million trees.

Wim Wenders has created a portrait of an artist, Sebastiao Salgado, whose face is as smoothly worn, craggy and lined as the mountains he loved and full of the light from the tops of those peaks, which spreads out in every direction.

An open studio that my friend Erica is offering . I had no idea what I’d do this time. Sometimes showing up and allowing the inspiration of ...