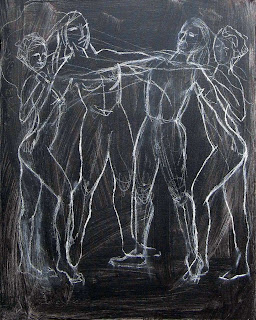 Playing with code. Created a pop-up window using html. Click on image to open pop-up. Then click and drag on the lower right corner of the pop-up screen to increase the size of the drawing (I uploaded a large image- 1496×1872 pixels that's only 299KB in size and yet perfectly clear on screen).

Yes, I am stalled on this piece. Will and determination carry you a long way, but there have been setbacks that have left me exhausted. Three responses that I didn't feel were fair - not about this piece in particular, but there's an effect I guess. It takes awhile to psychically heal, I know this from years of experience, but then you continue on.

Saying this by way of meaning Courage, My Love. To all of you with your talents and projects. Follow your inner desires, and if you've a set-back of whatever sort, take a break, then pick yourself up and keep going...

Email ThisBlogThis!Share to TwitterShare to FacebookShare to Pinterest
Labels: drawing for painting, inspirational

Today I downloaded from Librivox Dostoyevsky's, Notes from the Underground, a book I have tried to read on and off for 30 years (I had read The Brothers Karamazov and Crime and Punishment).

When I was younger a storm of words was in me that only words could feed, and so I read like a dervish, and yet this book, I could only read a few paragraphs. Even a few sentences of this book triggered so many thoughts that I found hours had gone by and I had not read to the end of the first page. Last year I tried again and drifted into a philosophical speculative mood that also made me aware of my own tattered and ragged weltanschauung edges.

But now, thanks to an audiobook where it is read to me, I can listen during long walks with my dog in the night. Tonight I listened to half the book. How can I express how I love Dostoyevsky's vision, humour, seriousness, learning and depth of feeling- his exceptional literary talent (even in translation) whereby he presents a psychological book of anguish, an interior rumination of a gauntlet through life?

I am so glad for the gift of this book, the way I have found to finally 'read' it.

Dostoyevsky created a narrator in this book who is unlike any other. I can only think of a handful of books that are entirely composed of a soliliquey that reaches deeply into the philosophical and emotional depth of a life (one that comes immediately to mind is Clarice Lispector's, The Stream of Life, though it is an entirely different book, being a poetical treatise of a dying woman who writes what she thinks, feels, remembers, imagines without any barriers, from her pure pumping open veins).

Anyway, today I downloaded Notes from the Underground from a newly discovered gem of a site, Librivox: acoustical liberation of books in the public domain, where volunteers read books whose copyright has expired. Only I found the (male) voice(s) a little too strident, too peppy for this dark and difficult work, so I spent hours enhancing each .mp3, which is how each chapter arrives, adding a slight reverb, an imperceptible echo, some extra bass (double on that), a tad of voice enhancement, making an audiobook of over two hours that is an easier listen, that doesn't interrupt the text in its speaking.

It was an amazing walk tonight, my dog and I and Dostoyevsky. During the quiet dark of Earth Night.
_______
Who knows why I am taking these over-exposed flashlit computer photos at night... though this was after turning the lights back on!
I don't know how to turn off Photobooth's flash, I guess is it. But then without the flash the photo would have been shadowy in a pixelated way.

Laying low these days, not a lot of energy, a quiet time of cessation, not writing or painting much, so some notes on two great scenes in films, Wings of Desire, and El Secreto de Sus Ojos, and the use of the avatar in Avatar...

These notes are responses triggered by an article sent through via a group email by John Walter, called, Bringing New Understanding to the Director's Cut, by Natalie Angier, one of my favourite science writers in the New York Times, about brain waves and movies, our attention spans and shot lengths...

Speaking about scene lengths, comprehension versus immersion, one of my favourite scenes in all movies is an uncut 15 minutes or so in Wim Wenders Wings of Desire. A scene near the end of the film where Marion and Damiel meet in the bar. He, a Rilkean angel now fallen into mortality for the love of a beautiful woman, and where she utters some of the most profound words in all love poetry, Handke's poetry in collaboration with Wim Wenders, of course, how could anyone but poets have written this script (I used this quote in a suite of poems too): Loneliness means I am at last whole.

Only with him could I be lonely. Open up to him. Completely open, completely for him. Welcome him completely into myself. Surround him with the labyrinth of shared happiness. I know it is you.'  Wings of Desire.

On Avatar, I found this thought-provoking article which has left me thinking about the alter-ego, the created double, the imagined self, a folded back Platonic emanation of the pure forms, an enhanced version of the self presented on-line, the spy, the scientifically DNA-cloned reproduced enhanced self, the avatar:

From "Avatar and the Flight from Reality" in http://www.thenewatlantis.com/publications/avatar-and-the-flight-from-reality by James Bowman:


"It’s no accident either that Avatar is named neither for its gentle Na’vi people nor for the nasty corporate and mercenary colonialists nor even for the glorious, shimmering blue bioluminescent world they both inhabit. The name “avatar” comes proximately from the already familiar technology by which people nowadays contrive to become “drivers” (as they are called in the movie) of some second life, some alter ego in a wired-up world that is more in their control and therefore, paradoxically, more exciting to inhabit than the real one. In the case of the film’s human hero, played by Sam Worthington, the status of this sort of “driving” as wish-fulfillment is underlined by making him a paraplegic. Only in video-game mode, therefore, does he become fully alive and mobile, even while retaining his humanity. For him the decision to abandon his earthly body along with his earthly loyalties, to become his avatar and throw in his lot with the Na’vi, is presumably not even a difficult one."
Bowman points out that "the word “avatar” comes from the Hindu idea of a god come to earth."

Something to mull over. I thought Avatar an amazing film, I really did. It was the special effects, yes, but also something in the vision calling. That interconnectedness of all life, the energy of unity. The plot, eh. What's to say? Pretty safe and bland, like a Disney movie. Cameron took no risks there.


And, finally, on an amazing 5 minute nearly uncut scene as the camera weaves following the protagonists in in El Secreto de Sus Ojos...

Now El Secreto de Sus Ojos! -real filming! That scene through the stadium is nothing short of a tour de force. I read somewhere, though of course couldn't find the reference when I went looking, that that scene took 2 years of pre-production, 3 days to film, and 9 months to edit... and it wouldn't surprise me, not at all. Go see the movie at an art house, a revue theatre, wherever it's still playing after winning the Oscar for best foreign film.

I found this website which gives some idea of the camera virtuosity in this scene. Do go and take a look, read about the way the scene was composed, the cameras used, the angles, the challenges and the success:

I like that the soccer stadium scene is portrayed (mostly) through a handheld camera; I like that it's not animated somewhere else in the studio and enscripted onto the movie. I like that real people spent many months planning the scene and filming it and editing it so that there are 7 barely noticeable cuts in a swirling 5 minutes... overnight with the Oscar spotlight this scene became world famous. It is being studied around the world.

While I would call this scene 'immersive' rather than a 'comprehending' one, we are running with the protagonists, searching through those crowds, racing up and down stairs, checking cubicles, getting punched in the face, running... I would say that the aim of the film itself, its overall thematic thrust, is to allow us to more fully understand love, the necessity of love, how it drives us, and, watching it, we find we have left Freud's pleasure principle long behind as we immerse ourselves in the depth of this film's messages... on the power of love to motivate us to do what we do in our lives.