Last night I lay awake most of the night, knowing something... she was taken to the hospital by ambulance at 3am. My mother is dying. She had a stroke, a mild heart attack and has pneumonia. Without a 'living will,' she will be resuscitated if she stops breathing. Her dying could take a long time, as my father's did in ICU in a high tech hospital. But, essentially, she is gone. She'll never go home again. I feel very strange, though she is 89 and very thin and frail and we've known it could happen at any time. If I'm absent... it's because... thank you so much for your kindnesses, understanding.

Since Tangled Garden, a triptych of earth poems, spans 30 years of poetry writing, and took 9 months to video, edit, subtitle, with more blood, sweat and tears than I like to recall, I continue to post comments, and responses to it. It is a major piece of work for me, and so far, if only one of my videopoems remains, I would like it to be this one.

Bent Lorentzen's comment, in a post where, mostly, I defended my videopoem, caused tears of gratitude. I shall not try to summarize his comment; rather, present here in full.

Bent LorentzenFeb 21, 2012 10:06 AM
Oh my, you take me to so many places with this, Brenda, literally and figuratively. And when you talk directly to The Great Mother Earth, well into the video, you even evoked a totally unexpected tear from me.

I've seen pieces of this as you shared them in the production. What a mesmerizing journey, into your soul, and the soul of us all. Brenda, this full-length product evokes all sorts of deep emotions, some primitively-emergent tribal, some divine, as if there is a difference. It's very rare that a video this long can hold the viewer so well, but you do it masterfully with an integrated visual and auditory tension, and gentle releases, that are never too much or little, but just right... a single ancient tree with many branches and deep roots, each with their specific nuances, integrated in layers out to the cosmos and deep into the primal. I can only imagine the time and deep patient work you've put into this.

And you invoke humor: "We are told quite succinctly, to stay away from dreams and poetry. Moreover, natural is unnatural... creepy and viney, you scare us, heavy and pendulous, not at all like a laurel tree..." - the metaphors are outstanding!

Oh, the layers in this, the colors, the shadows and light, I haven’t enough vocabulary to describe the sheer exquisiteness of experiencing this multimedia experience. If I were back in my college days, with a half Cherokee philosopher who guided a couple of acid trips, including one with Walt Disney's Fantasia, I would be beyond the beyond into a most wonderful trip from this film. But I am a well grounded shaman in my own right now, deep in the roots of the planet, and already in the cosmos of my highest most subtle heart, so your work, Brenda, is nothing short of, excuse the redundancy, a masterpiece.

It is worth anyone's time to feel, I mean really F-E-E-L to the core, every single dripping dewy, sunshine bright, moonlight shadowy, archetype-inducing moment of this video. And it holds and expresses so many subtle little clues which reflect back upon the viewer... so my advice to any potential viewer is don't take you eyes or attentions away from any of its unique moments, for you will gain insight from, again excuse the redundancy, you will gain insight from this holistic audio-visual presentation.

As you can see, Brenda, I can't praise it enough, and am lost for words.

So drink it up sober like me, to get drunk in the Rumi way, or drink it up in any other way, you will be not only entertained but wiser from the experience.

And what a spine-chilling powerful finale, and I won't even describe it. That's for other viewers to experience

Thank you, Brenda, for making this. I'm going to dream well tonight. 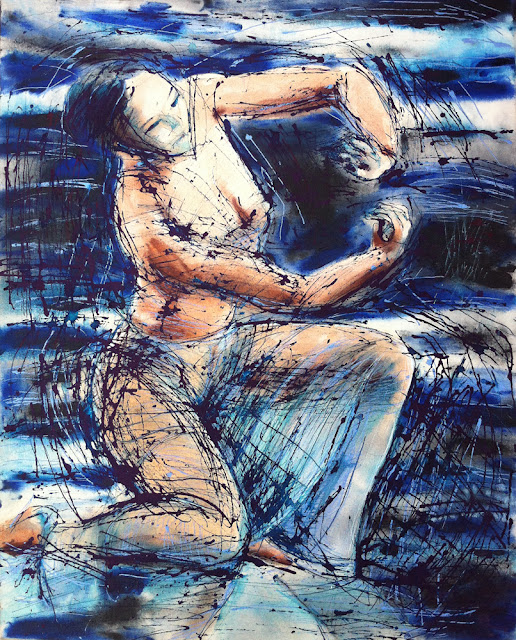 This painting was worked on in 4 successive stages over 8 years. The figure was sketched on the canvas in 2004, and first painted in early 2005 - when the background was done and the figure roughed in. In 2009, the figure received more definition. Celestial Dancer III was completed, 8 years after it was begun, with slashes of permanent blue ink (two days ago, she is still fresh). She hangs on my living room wall, where already she has received compliments from visitors. I am fairly shocked, and delighted, that this painting is finished! 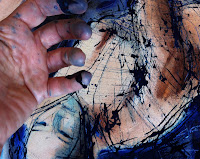 Blue Blood. If you don't bleed, is it art? :laughs: 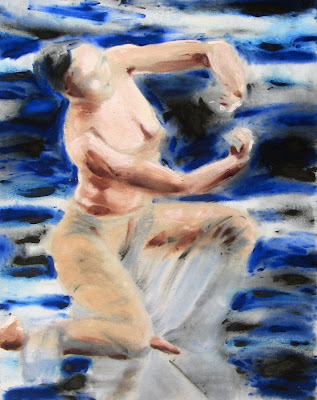 When this painting is a little drier, I'll work on the details - though surprisingly if cropped a bit it looks almost finished now. It was not easy to come back to this figure when I have let her sit in storage and my rooms here and in Vancouver unfinished for 5 years. With courage and force of will, I began to complete it. First I tried painting her on an easel, which  perhaps isn't my style in that I probably dance over the work as I am painting. A quick trip out to purchase 2 yards of thick clear plastic at Honest Ed's, the kind for tables in Italian restaurants, would protect my living room floor. I placed it on the floor, with a little prayer that neither my cat nor my dog would inadvertently wander over the painting space, the canvas surface of wet oils, along with a long piece of unused canvas on the side in case of spills, and shone a clamp lamp with a daylight bulb on the area. And then carefully laid the painting flat and wetted it and painted from the tube with fingers and washes with a large thick brush and oh solitary dramatics in an attempt to feel my way into the movement of the dance, her moment of stillness... she is graceful, beautiful, I don't know if that comes across. Hope so! 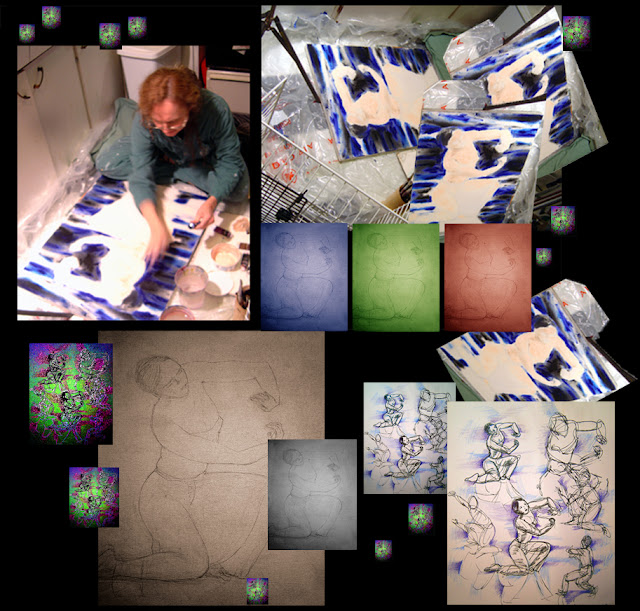 Despite the gloom of earlier, I moved my art supplies into the little unheated kitchen (an add on to the original house), that wire up front a makeshift dog gate, and my studio heater, which warmed me up marvelously, hang the 1600 watt usage, sat looking at the canvas, as I did yesterday for hours, and couldn't begin, and, you know, wept for long while, entered into a zen state, and squished paint around for maybe 20 or 30 minutes, and now I have the first, most difficult layer... 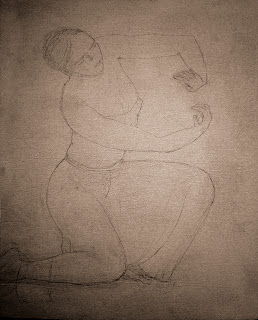 The drawing on the canvas, with a 2B pencil (shown with a Sepia photo filter), in 2004. 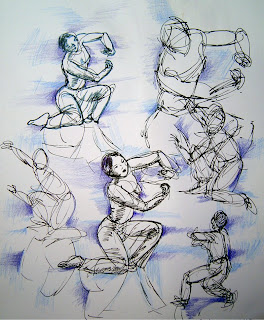 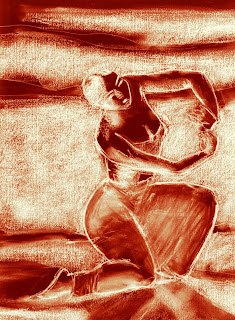 Original sketch with a Photoshop filter. 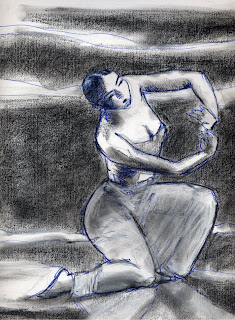 The original sketch in 2004, 14" x 17", graphite and ball point pen (an after thought, and thankfully the ink has faded out). My brother had this drawing professionally framed and I have to admit, it looks good on the wall in his apartment.

A tunic from a dress: re-formatting the 90s

For about a year and a half, I have been following a blog called New Dress A Day by Marisa Lynch (she will have a book out in Oct). Marisa was out of work a few years ago. She loved fashion. She wanted to do something creative. So she decided to take used clothes, that she bought at Salvation Army, Goodwill, Thrift stores, etc., and give them new life. Her only restriction was that she could spend no more than $1.00 per item per day. It was a great year, I tell you. She did some amazing transformations. Since that year, she has either posted other people's finds and fittings, or, sporadically, her own. She not only snips and sews, but dyes, glue-guns, and once even made a cool purse out of 1980s shoulder pads!

Below is a dress that sat in a corner for 6 months awaiting the 'Marisa Treatment.' I loved this dress, originally bought at 'La Cache' (now Cornell Trading) on sale. It was a sheer rayon dress, and way too big for me, not only in the 90s style, but a(n overly generous) medium size. No, no - it's not a 'fat' dress, I was always the weight I am... it's only ironed. I used to love dancing in it, having it swirl about me.

On the night that we went to the superb Paul's Spaghetti, which was my niece's Christmas gift to us and where she is the only waitress, I realized I had nothing to wear. Oh ha. A few hours later, I had finally reformatted the dress. I took it in by 20" - 10" on each side! After cutting it to shorten it into a tunic top, my daughter grabbed the left-over and said she was going to make it into a scarf. The print really is nice, as is that red.

These photos weren't so good, so I played in Camera+, being too lazy to ask anyone for another photo shoot.

Before... bought maybe in 1997 or so, I used to wear it over a danskin for dancing at Sweat Your Prayers, which was a weekly venue in Toronto in those days, or with a belt over a black silk slip. Loved the dress, and fabric, and could not bring myself to throw it out, though with sleeker current styles it seemed like a tent dress and unwearable.

Snip, snip! (and the real colour!)

And now a great little tunic top, which I can wear with tights and a black skirt, or with my velvet leggings, or a pair of skinny jeans. Dressed up here with some dangly jewelry and my red Venetian glass beads, and a belt, I'm on my way out to hear Paris Black sing at The Unicorn (last Sat night) with a bunch of friends.