'Motorcycle-riding poet Aaron Miles makes some of his daily bread as a cultural investigator.  He likes nice little cases with an element of art or literature, and no violence, thank you very much. But a wealthy Toronto family hires him to wrap up the affairs of their recently deceased black sheep uncle, a notorious anti-Papist and man of letters.  In particular, they want him to erase any traces of a past conspiracy the uncle had alluded to. Rich families hate scandal. Against his will, Miles uncovers a plot, both large in scope and decades old, to keep the lid on the truth about a major mystery of the 20th century. Set mainly in Prince Edward County, the story accelerates to Toronto, upstate New York, and the Dominican Republic as Miles tries to stay ahead of the secret's shadowy enforcers.'

Bio: John Oughton is Professor of Learning and Teaching at Centennial College in Toronto, and the author of five books of poetry (most recently, Time Slip from Guernica Editions), the mystery novel Death by Triangulation, and over 400 pieces of literary journalism. He is also a photographer and amateur musician.

John Oughton's website: http://joughton.wix.com/author
Death by Triangulation at NeoPoesis Press: http://www.neopoiesispress.com/12401/127994.html
where you can purchase it. It is also available at all major booksellers.

The interview, video and video-editing by Brenda Clews
http://brendaclews.com

In the interview, I propose, though a novel that follows normative variations on a prescriptive plot trajectory with a cast of individualized yet expected characters, which the author mines to add humour to the novel, that the way scenes are structured through the imagery Oughton uses makes the detecting work, the crime fiction itself, the solving of a murder, a maze of a poem.

The interview took place on a warm evening in early November 2015 at John's apartment, and I used what turned out to be an impossible-to-key-out-green-screen fabric backdrop, which presented numerous challenges not only in FCPX's keyers, but a keyer I purchased from FXfactory. Because I had a small clip with this fabric of my cat shot in 2013 and discovered iMovie '11 could instantly key most of the olive and pale greens out but leaving an interesting mottled effect, I assumed it could be done with any newer keyer. Not so. Eventually, I remembered the old iMovie, and that I had bought it as a CD. It was a bit sticky, but I was able to install it on my Mac in a separate folder in Applications. It doesn't do a refined job of keying, but I was looking for more of an artistic effect.

Because 'talking head' videos can be bland, I asked John to video a motorcycle ride that I might put in the background. He duck taped his iPhone 4 to his helmet and nearly lost it in the ride! He also sent me some of his nature photographs. That clip is in the interview, and some of the photos are obscurely layered in circling effects. Then I shot some slomo video with my iPhone6s+ while traipsing about empty roads in Ontario in January 2016. Using the iMovie '11 keyed clip, and a number of effects in Final Cut Pro X, I produced a moving roadtrip background that, I hope, will be just a bit strange and keep the eye visually entranced for the 18 minutes of the interview. The keying is what it is and took days to figure out and I decided that the buzzing pixellation in John's hair and the noisy cloud next to him only add to the slightly surreal presentation of what is a talking head interview.

It is a good interview with a conversation of some depth on the novel itself.
___

Good news. I received a contract from Quattro Books to publish my novella in the Spring of 2017 (my poetry book with Guernica Editions is coming out this Fall). Another publisher sent a response that made me feel that rare thing, understood as an author, and I consider it my first review: "We found your formal experimentation with "S*'s" characterization highly appealing, in the way it plays at the boundaries of poetry to reflect the sensuousness of experience. Overall, we felt it was an accomplished work."

My book has found the right home. Lovely to join the Quattro family!!!
___ 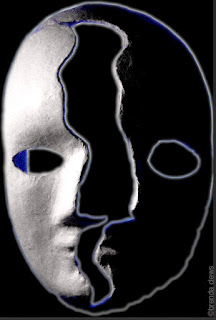 Still working on my performance videopoem, Split Mask. It's subtly complex visually and the editing program is on overdrive. I kind of like this drawing/crop I did in Photoshop - it took hours to figure out, with lots of trial and error and starting over and over, drawing with a stylus, and so it is a digital drawing more than anything.
___ 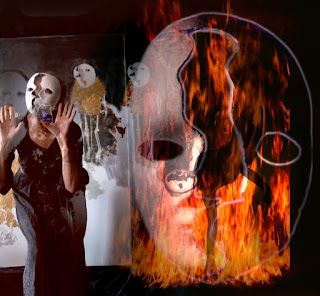 This is kind of a cool nanosecond in my upcoming performance videopoem, Split Mask.

The line:
"The mask,
a paper image
burning."

[Aftereffect: Ten minutes later, finding it too bright,  I went in and keyframed the opacity of the flames, and so the moment as it appears here no longer exists in the videopoem.]
___

Ganged Up On By My Muse, I Am! 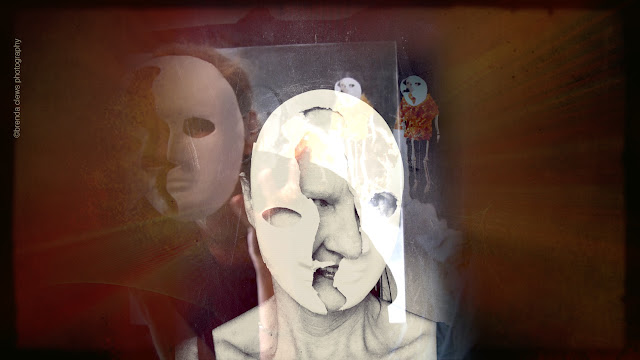 Another 2 second image from my forthcoming performance videopoem, Split Mask.

I've performed this poem a number of times around the city in features and on open mic in the mask, which I made in the Spring of 2013, and which insisted on a political poem, that was begun in the Summer of 2013 and completed in the Summer of 2014, and then they insisted on a 5' square painting, which I painted in a mad frenzy over 3 days at the very end of 2013 for a solo show at Urban Gallery in January and February of 2014, and now the mask, the poem, the painting are insisting I finish a videopoem, begun in the Fall of 2014, and not yet complete.

If I get the performance videopoem done this year, if, it will be a 3 year project! From 2013-2016. All begun with a little image in my consciousness that wouldn't go away and which I had to make: the split mask.

A photo in my upcoming videopoem, Split Mask. 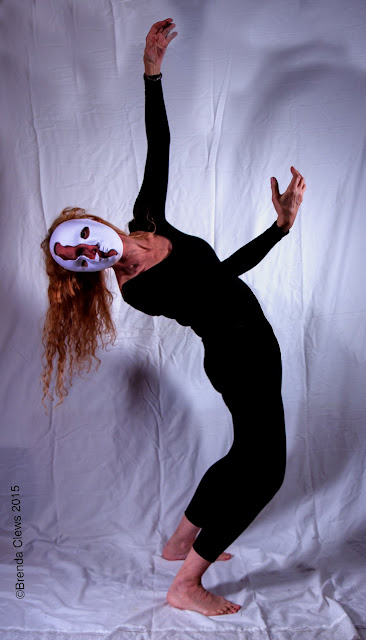 A photo in my upcoming videopoem, Split Mask. This has 3-5 seconds on screen, a mere blink. The line is: "Focus
on where
we are falling apart."
___

Toronto Hydro rates are not only beginning to skyrocket, but their billing is a total mess right now. I have only electric heat and never turn on the baseboard heaters - yeah, it's cold! I try to keep my Winter hydro rates under $1.00/day. Crazy, right? Shudder me long-johns, but I manage, somehow.

But look at these screen grabs of what's been happening in my account for the past few weeks. Toronto Hydro originally estimated their Dec charge for me would be $335,635. when in reality it is about $44. And then I got some "alerts" in my email with incorrect data and estimates. I'm keeping a close eye on it and will not be over-charged. But I want to point out that Toronto Hydro's billing right now is insane! 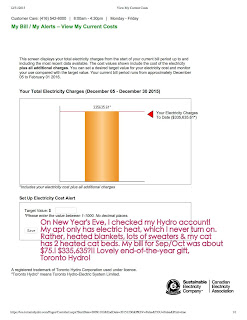 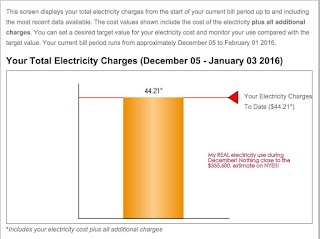 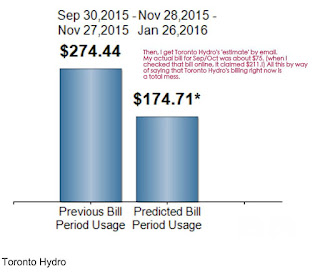 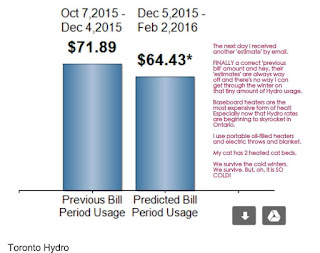 Some eBooks from the library

Reading some eBooks from Toronto Public Library on my device. These books disappear after 3 weeks - you can renew for another 3 weeks if the book isn't on hold. All eBooks I've borrowed are on hold. Apparently, publishers grant the library a license that costs say $80. for 4 copies for a year, after that year the library has to renew the licence and pay all over again. Seems like a sweet deal for publishers.

Because of the way publishers charge libraries for eBooks, and the very limited number of copies of each book that there are, you can be waiting up to 6 months on hold for an eBook.

Arctic Dreams by Barry Lopez has been on my "a" list forever. It is factual, humane, and the poetry of his writing is magnificent!

Here's a sample of soil writing:

Soil, dirt. Stuff I love! The base of our organic lives and our food. "Soil is a living system, a combination of dirt (particles of sand, clay, and silt) and decaying and processed organic matter. It is created by erosion, fracture, and the secretion of organic acids; by animals and plants like beetles (saprophages) and mushrooms (saprophytes) that break down dead matter; and by the excretions of earthworms. It draws in oxygen like an animal, through myriad tunnels built by ants, rodents, and worms. And it is inhabited throughout by hundreds of creatures---nematodes, mites, springtails, and soil bacteria and fungi." Barry Lopez, Arctic Dreams (screen 85/1127 on my device). 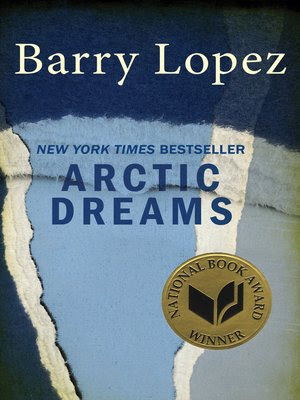 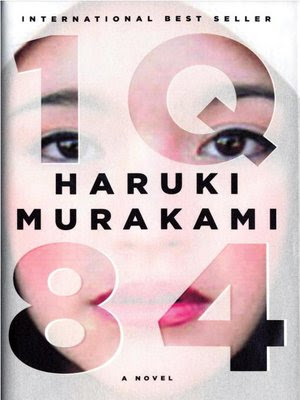 I am finding this book long, in the way that poets do. But I am amazed at how many resonances with my own life I am finding in its pages. It is well researched and well written.

WISHING ALL OF YOU LOVELIES the BEST year ahead! 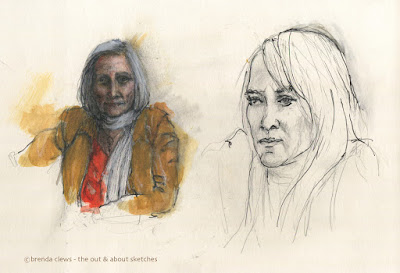 Determined to draw on NYE, crazy idea, I attempted... lol! NOT a night to draw! Full of delicious food, too much wine and the warmth of great company! Sharing anyway 'cause what the heck, it's a NEW year! Bring it on, 2016!!!

WISHING ALL OF YOU LOVELIES the BEST year ahead, full of wonderful surprises, health, prosperity, accomplishment and so much love, warmth & friendship you feel every day is pure blessing.