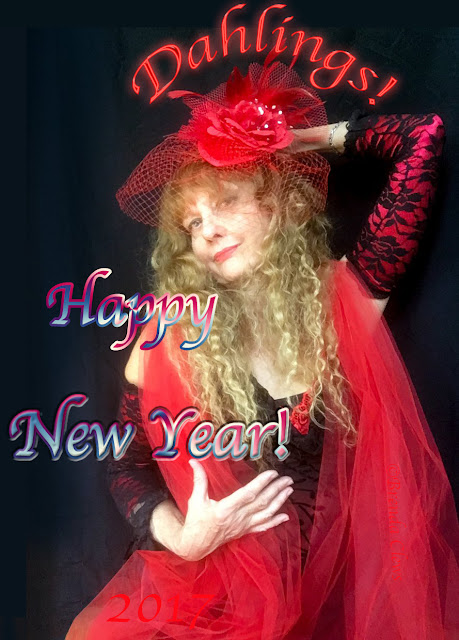 Dahlings! Wishing you an extraordinary 2017 in all ways, creative, spiritual, financial and in your relationships. Overcome oppressions with true tidal fury!

(costume I patched together to perform Tidal Fury, a book about overcoming oppression)
___

Wishing you the best of the Festive Season 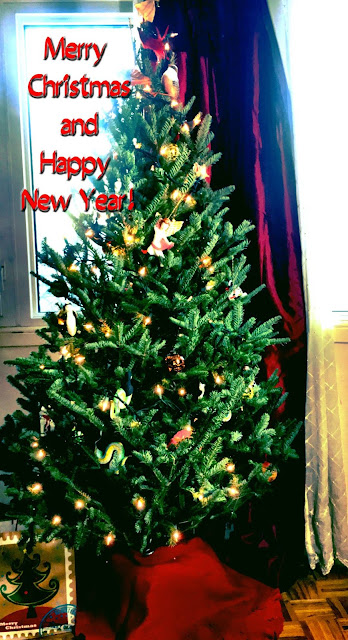 Wishing everyone a wonderful festivity of giving, love and feasting! Happy Christmas, Hannukah, Shab-e Yalda, Yule, however you celebrate the birth of the light!

(The most perfect tree ever - it is real, yes!) 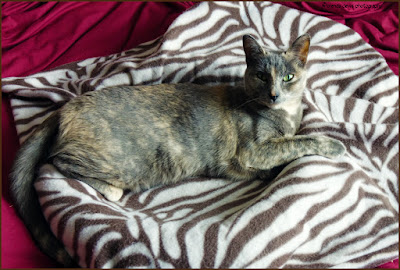 Some tentative good news - my kitty, Aria, is lightly using her paw again when she walks. Not every time, but definitely last night and this morning a little bit. Which implies that it was a bad sprain (the vet's original diagnosis when I took her in a week before the appointment where he took x-rays). I've seen no sign of an embolism - both eyes blink fine, breath out of both nostrils, both sides are fully sensitive and getting stroked on either side elicits loud purring, just a sore paw that seems to be getting better. She sleeps, she eats, she's playful, she's demanding, she sweet, she's fully herself. It's been 2½ weeks since I first noticed a limp. She still scoots around on three legs, but there is slight improvement (it's that right front leg in the photo) and, hopefully, she is healing.

I am quite happy indeed. The vet may have been right in his diagnosis on our first appointment.
___

Wishing You a Brilliant Solstice 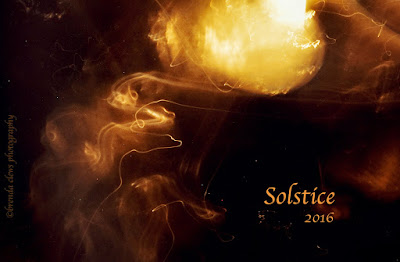 Happy Solstice! When the sun is furthest, the night darkest, the return begins. Immanence, beginnings. Yeah, and also, be the shining light you are.
___

I thought my pussy cat had broken her leg, but it turns out there is no fracture and it may have been an embolism. She's only 4 years old. Here's a simple little sketch because I would like to paint her. No idea what the final prognosis will be, or what's coming. She is the sweetest little companion ever.

(Different crops suggested by PS of the same little simple sketch - she didn't sit in that position for long enough! Sort of drew everything while she was sitting near me by calling her and then she'd look up and I'd draw, except for the ears, and the whiskers, she was gone by then and they are mostly guesses...)

Here is a little watercolour painting of her where I did not particularly try to get a good likeness. 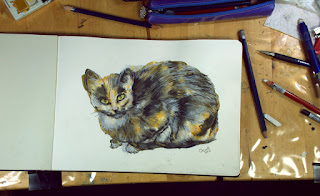 I'll post some photos when I have some new ones. Rather heartbreaking to see her scampering about on three legs and always holding one paw in the air, and I have no idea how I will afford the vet care.
___

Here is a video of my set for my book, Tidal Fury, at the Guernica Editions launch Dec 4th. The talented and lovely Karen Shenfeld introduced me and she said such nice things I was blushing. The MC was Anna Geisler, gorgeous hard-working lady. The Publisher, Michael Mirolla, is a literary force in his own right and has brought much fine writing to public attention with an substantial yearly publishing schedule. I am honoured and fortunate to be a Guernica author. Many thanks to all! 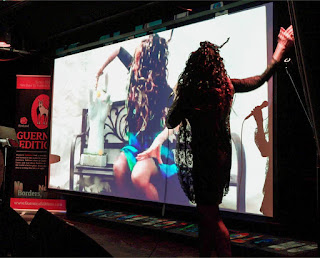 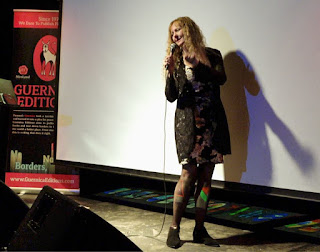 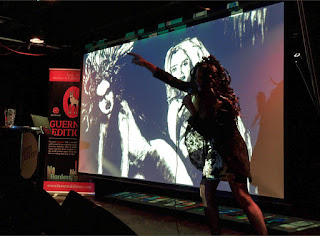 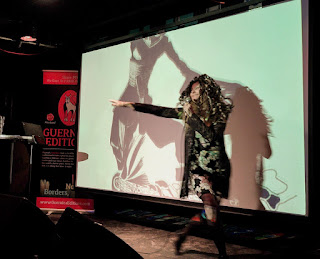 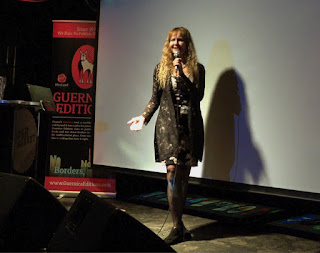 Tidal Fury is available from all major booksellers:

How often do you launch your first book of poetry? I wanted video even if I didn't show anyone. So I decided to video the launch so everyone is featured. While I will post my portion soon, here is the entire launch. Clarke Blaise and George Elliott Clarke are big names in Canadian literature. My friend, Luciano Iacobelli is also, to me, a prominent literary figure in Toronto. But everyone was fabulous! It was a superb afternoon

The Guernica Editions December 2016 book launch was a terrific afternoon of terrific writing! The afternoon of readings in order of appearance:

Mankind and Other Stories of Women by Marianne Ackerman 8:12
presented by John Goddard, introduced by Anna Geisler

The Examined Life by Luciano Iacobelli 46:05
reading in tandem with Jens Kohler
introduced by Michael Mirolla

guernicaeditions.com
videoed and edited
by Brenda Clews
at December 08, 2016 No comments: 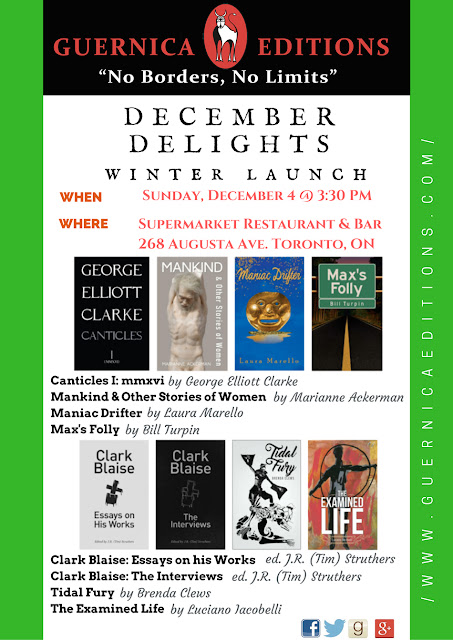 I would be delighted and very happy if you are in Toronto and came out to celebrate this wonderful launch with me on Sunday afternoon in Kensington Market.

The Guernica Editions launch for my book of poetry, Tidal Fury, is this Sunday, December 4, 2016, at the Supermarket Restaurant and Bar, 268 Augusta Avenue, in Kensington Market, from 3:30pm-6pm. Light refreshments are served.

You can see from the flyer that I am launching with some amazing poets and writers. Coming out to the launch will be well worth it. Plus the festive season upon us and there is a slew of great books to consider giving to yourself, family and/or friends!

If you are free on Sunday afternoon, and I hope you are, come and enjoy an afternoon of lovely writing from many authors and help me launch my book with style,

Hope you are all keeping well,
much love,
Brenda
___
Here is a list of the reviews of Tidal Fury so far, including a link to the wonderful video book trailer Gabriel Quigley did for Guernica Editions.

From the back cover:

She rose,
a soot-blackened woman,
from the fine layers of silted taupe ash,
with scorched feet,
able to see in all directions.

Tidal Fury intermeshes styles in narratorial strands. A love story -- he was “a literary device, and then I discovered we knew each other intimately.” An aged narcissist who wields power and invokes a subtext on the social politics of power. A poet whose muse is Medusa. Tidal Fury is a poetry on the edge of the text of an interior ocean of fury and passion. The collection includes artwork from the poet.

"Tidal Fury is a richly layered, challenging collection by a multi-talented woman. Each line of Tidal Fury shuttles and re-strands a woman immersed in art, culture, mythology who braids and beads words and images in a complex, often erotically-charged conversation with various characters and with the reader, whom she meets “at the edge of the text.” John Oughton, author of Time Slip and Death by Triangulation
at December 01, 2016 No comments: