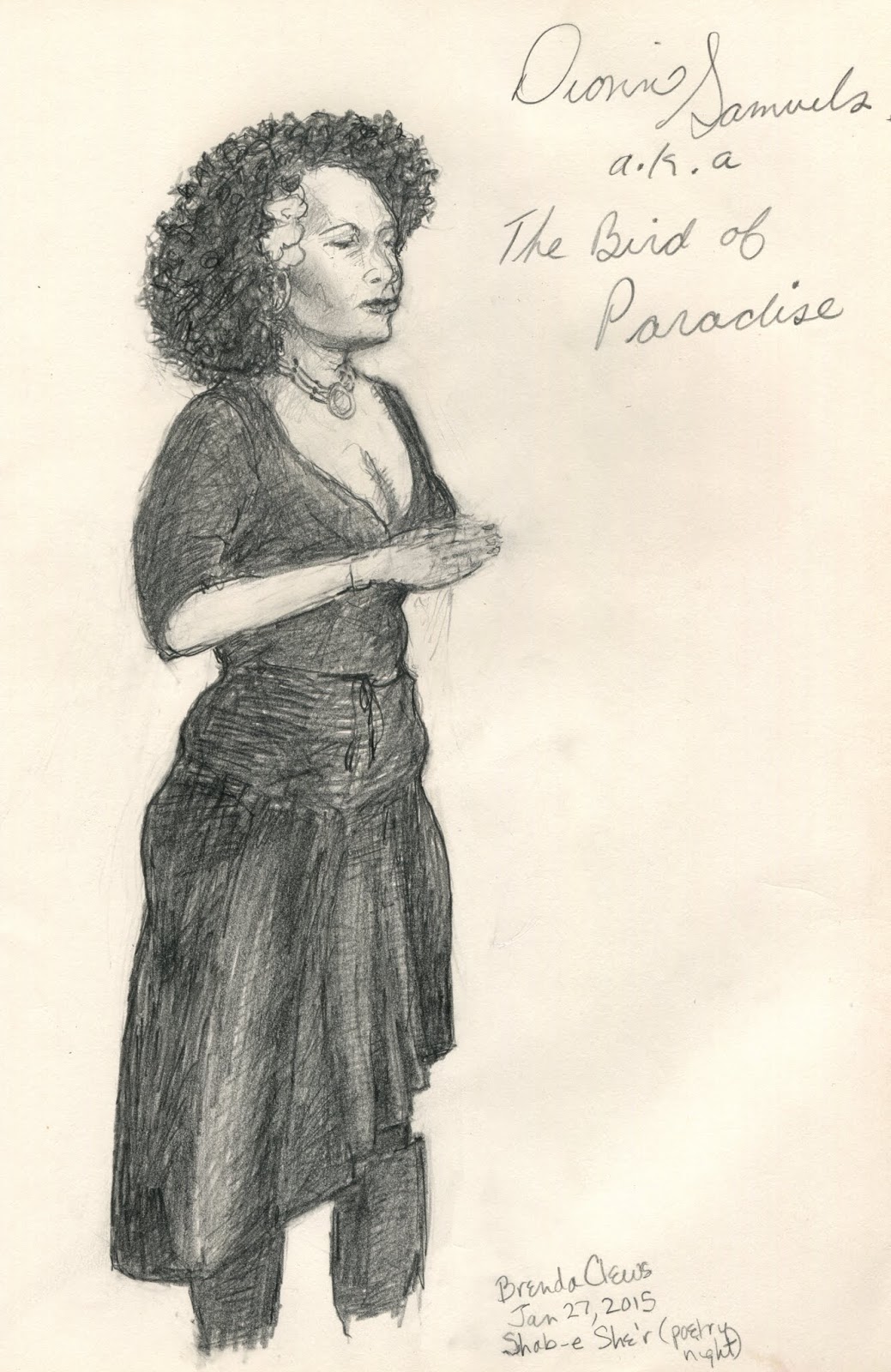 A little sketch of Dionne Samuels, aka The Bird of Paradise, while she was performing last night (Jan 27th) at Shab-e She'r (Poetry Night). Fabulous performance; fabulous evening!

While I am satisfied with the drawing, it looks like her and she liked it and signed it last night, there wasn't enough time for me to properly draw that arm, which, as an animated performer, she kept moving anyhow. I do not take reference photos when I sketch at poetry readings ever. Then, I'd become obsessed and continue to work on them, wouldn't I. 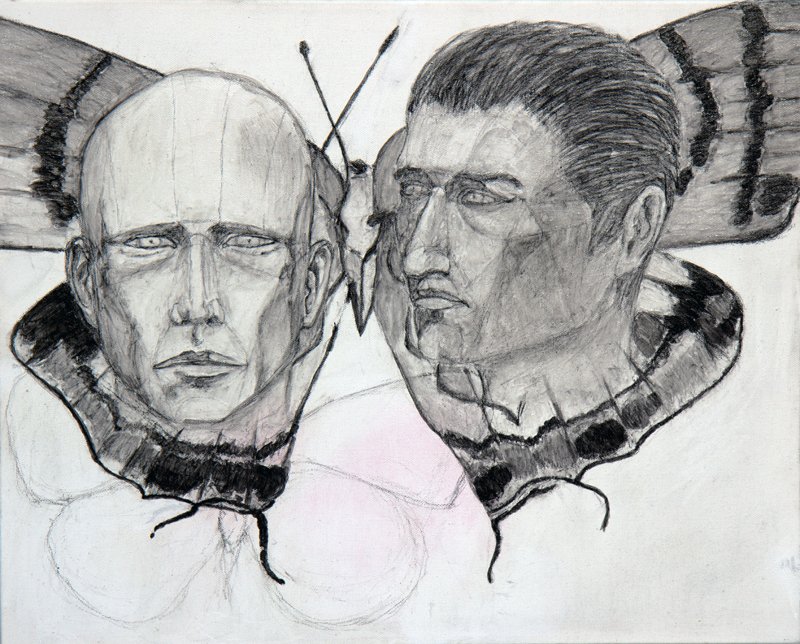 One of the small canvases I am currently working on. This is drawn in charcoal and then fixed with Golden's sizer, Gak100, which is very tricky to do without smearing everything. My plan is to add two more butterflies and lightly colour the painting in oils - I'd like to leave the underdrawing visible through colour washes. 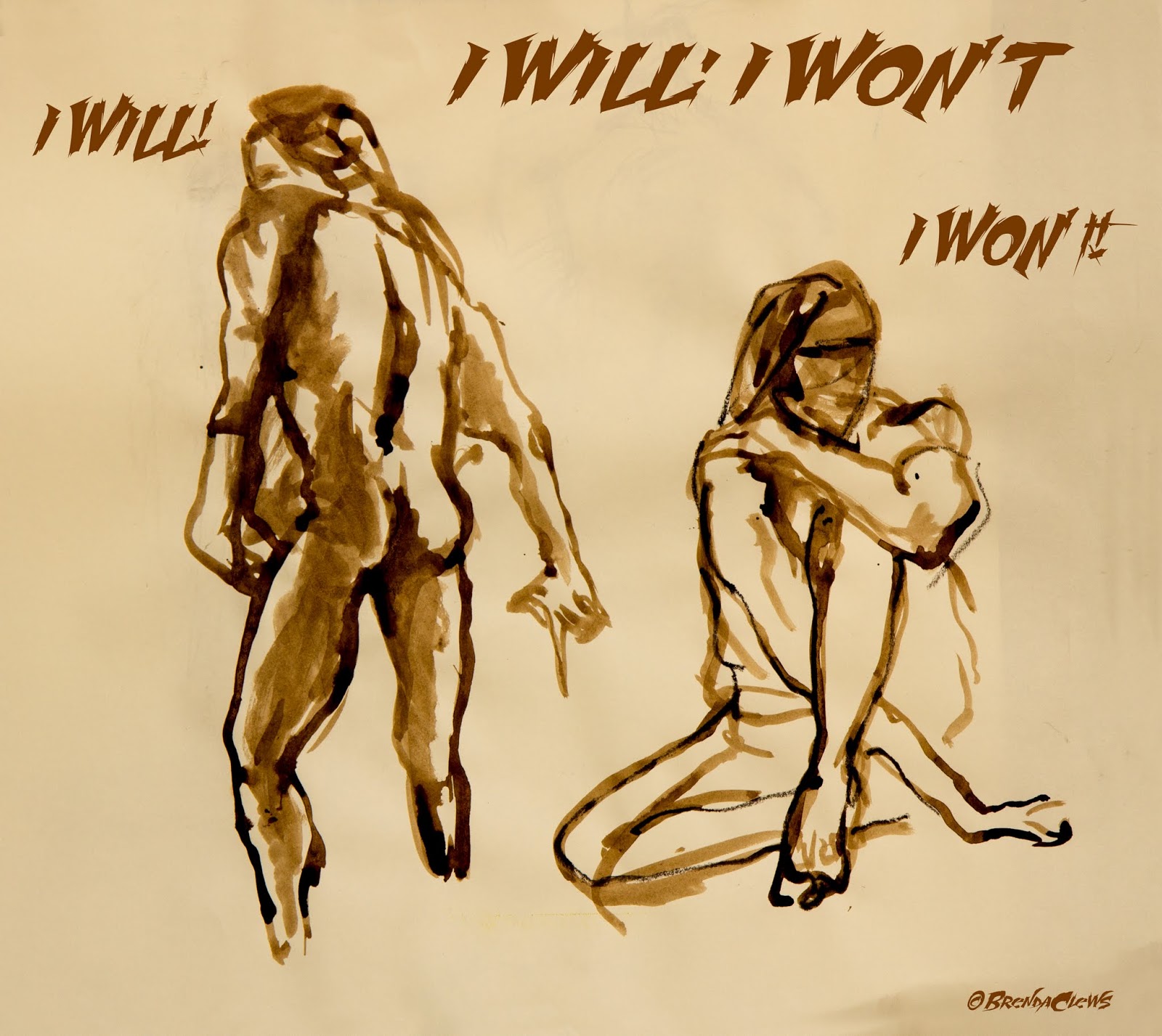 It really is "I WILL! I WON'T!" Look at the body language of the two poses. Amazing.

There are a couple of gesture sketches from a January drop-in life-drawing session, and I am working on a 16" x 20" canvas of two of the poses I drew that day. I guess photographing is becoming more of a 'task.' Finally I took this drawing outside and snapped it. 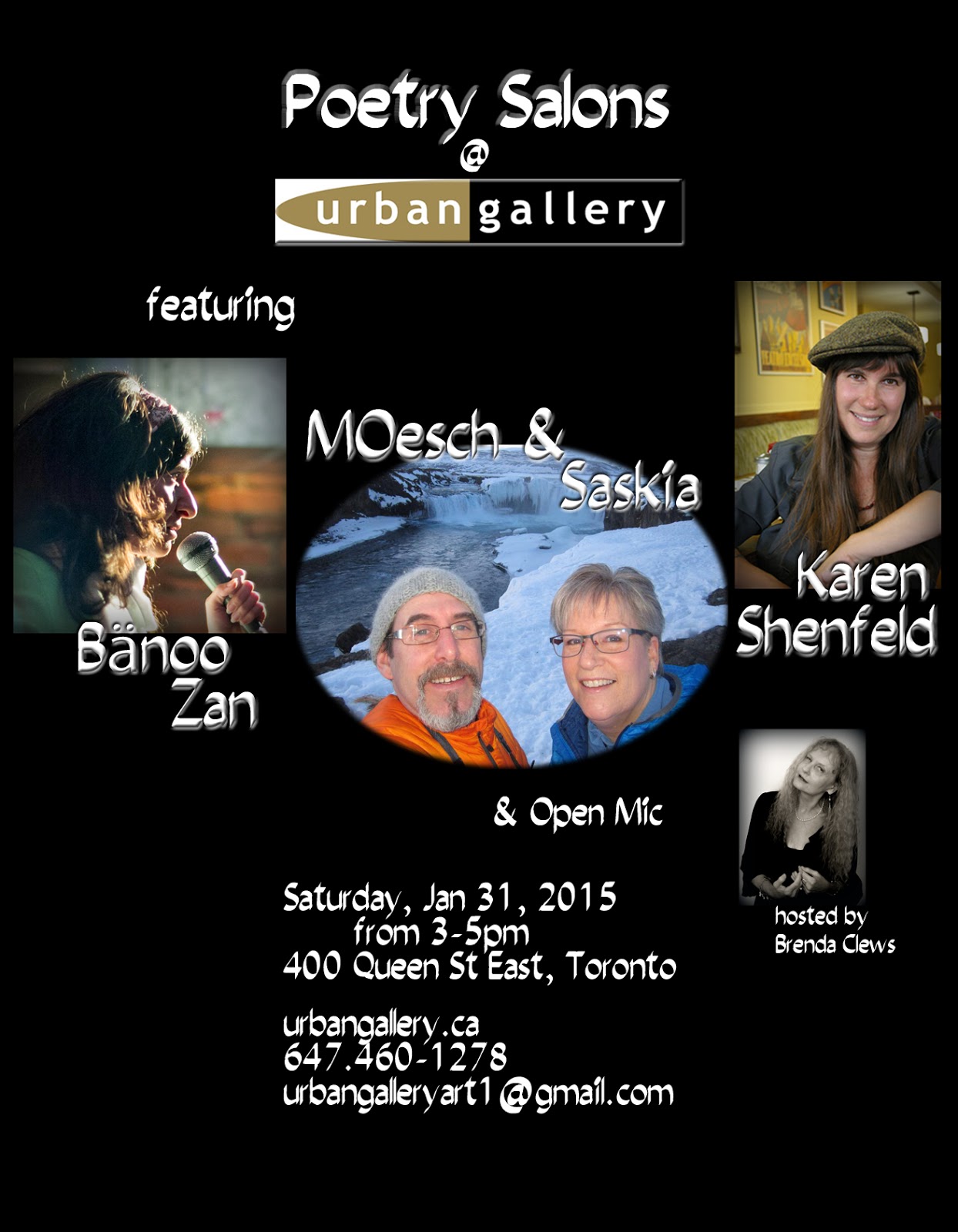 Please do come out on January 31st, 3-5pm, to Urban Gallery where I will be hosting another beautiful Poetry Salon if you are in Toronto. Yummy hot apple cider and mineral water on the house. Pass-the-hat. Open mic. After we go to a nearby restaurant to have a drink, snacks or dinner, chat. It's a great way to spend a Saturday afternoon.

Author SASKIA VAN TETERING is a lifelong lover of words, especially poetry. In 2008, Saskia fulfilled a lifelong dream by self-publishing her first book, life unmasked, comprising poems and short stories. Swimming to the surface, her second collection of poetry was published in 2009 by In Our Words, Inc., and in January 2012, bojit press in Toronto, Ontario, published After Philosophy. Saskia is currently working on her fourth book of poetry and short stories, River of Ghosts. She describes herself as a Renaissance woman, balancing her own business, the anticipated completion of a Bachelor of Arts degree after a 30-year hiatus, with finding time to write, volunteer, and to travel with her soul mate and husband, Michael. Saskia is a member of the Canadian Federation of Poets, of The Ontario Poetry Society, and of the Peel Chapter, CFP. She resides near the Beaches in Toronto, Ontario, with Michael and their fluffle of bunnies.

Up to eight Open Mic spots of 5 min each are also offered - sign-up at 3pm.

Rough draft of a small painting 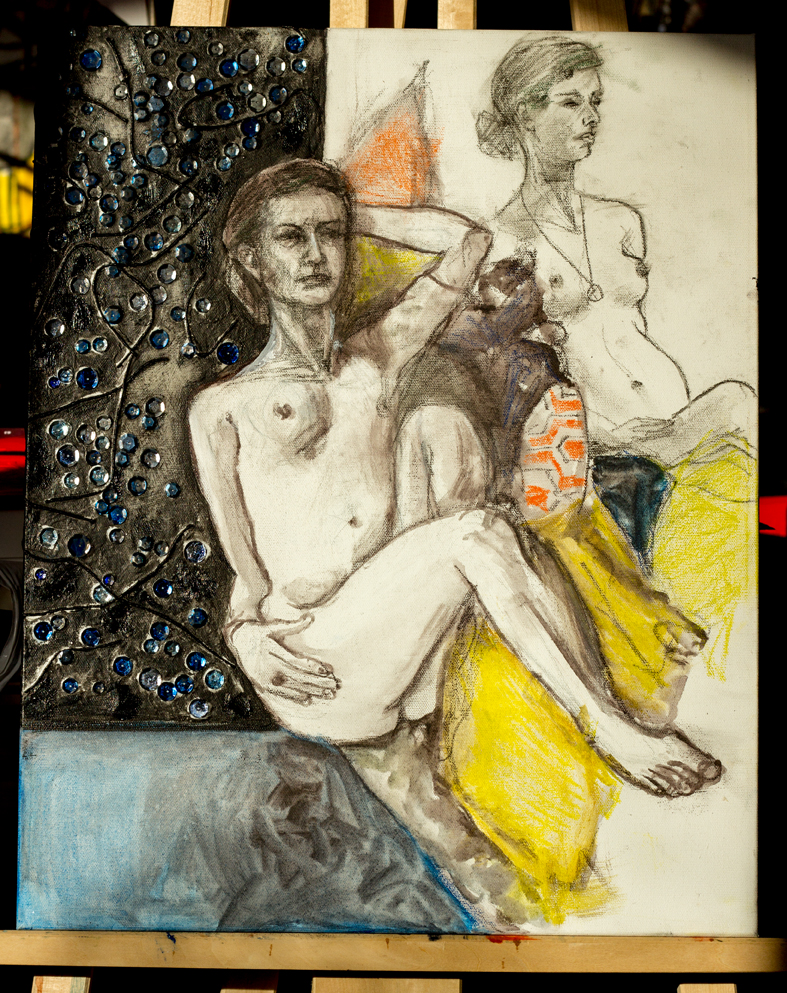 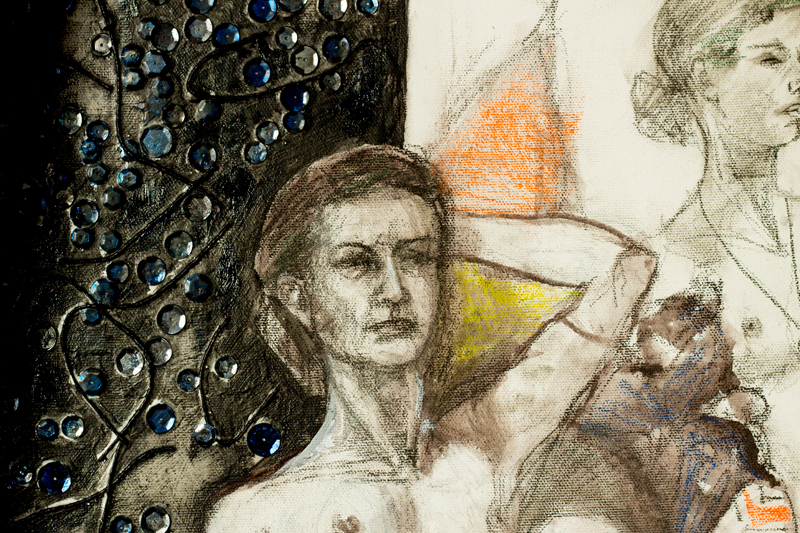 Because I would like to participate in group shows more often, I need some smaller canvases. So I have decided to begin a 16" x 20" canvas (on a 1.5" Gallery stretcher) during the final 40 minute pose at Bampot's drop-in life-drawing sessions. I am working on filling in the details on this one, of Amanda, that I began on Dec. 21, 2014. I also did a sketch of Paris a week or so back and, again, I put the 40 min pose, and a 20 min one, on the same canvas. I guess doubles and dopplegängers are my thing anyway. :) I took some photos of Amanda's (when I began charcoaling in some anatomical detail in the face and neck, it stopped looking like her) inside in sunlight from the window. Since I've hardly been sharing what I've been up to, I thought it was time to post something, even if it has a ways to go to completion (I turned the canvas, the foreground Amanda was sideways, lying down).
at January 20, 2015 No comments: 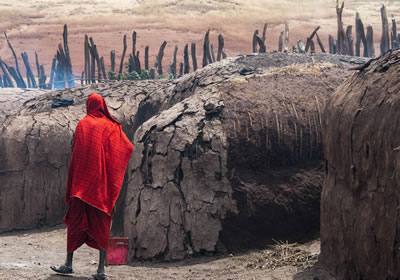 Lydon’s first photography show is currently at Urban Gallery: LYNDON WIEBE: Lost in Travels: Solitary Confinement, from Jan 15 - Feb 28, 2015. He is the Head Chef at UrbanSource Catering, and while his hor d’oeuvres at the Opening were a visual and gustatory art, his photographs are not of food, but of people and animals and scenes in warm earth tones and bright colours from Asia, Africa, Canada and New Zealand.

Wiebe’s photographs are often meditative, sometimes humorous. He describes his photographic aesthetic as capturing a moment, and framing it in way that it might resonate with the viewer. His photographs are not cluttered. There is sparing but good use of bright colour in his figures and scenes. We gaze at a stillness, a moment of a person or animal or place in the world engraved simply and strikingly.

Wiebe photographs never show a subject looking at the camera; rather, the camera gazes on those gazing into their own worlds. As we walk and look at the exhibition, we find ourselves wondering about the daily lives of the people he photographed and of their thoughts.

Wiebe says that when you travel, you travel alone even if you are with other people. Each journey is a solitary one. In his show, he offers travel as an interior journey of discovery of the world. 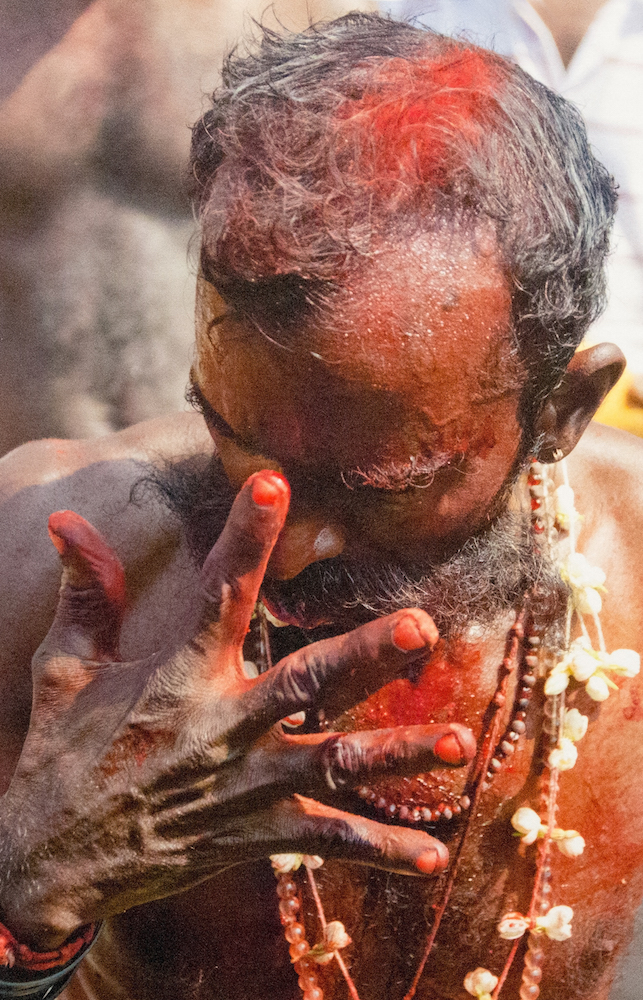 Among my favourites in the show are two photographs of men in trance dancing in a festival in Malaysia of over a million people. The powdery red of ‘Red Right Hand’ is vivid, the angle of the photograph striking, the sweat, feel of the air bring the scene alive and yet the man is withdrawn into his inner world and, as with its companion piece, ‘Deep in Trance,’ we slip into the mystery of those moments, gazing at the photographs. 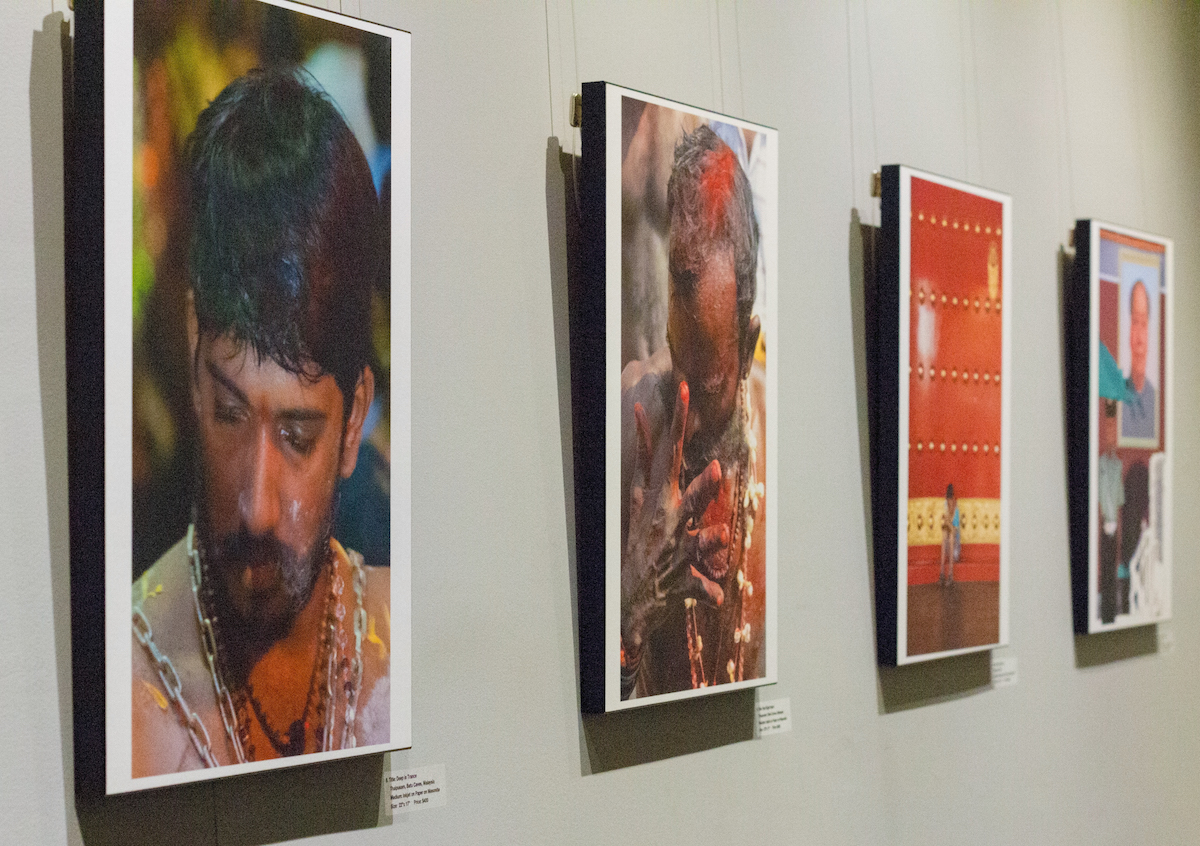 Another favourite is ‘Scenes from a Boardwalk,’ taken in New Plymouth, New Zealand. It is black and white. Are the tracks underwater? We see ocean on either side. The lines converge like a Renaissance perspective to a faint truck in the distance. Weibe was in New Zealand in 2007 and took a road trip by himself for 4 days. He came across a beach that was literally 90 miles long. It was 15°C, a cold day in New Zealand, and he was the only person on the beach — no-one in front of him or behind him as far as he could see. He says while they look like tire tracks underwater, they are on the sand. The tide was coming in, which you can see in the distance. 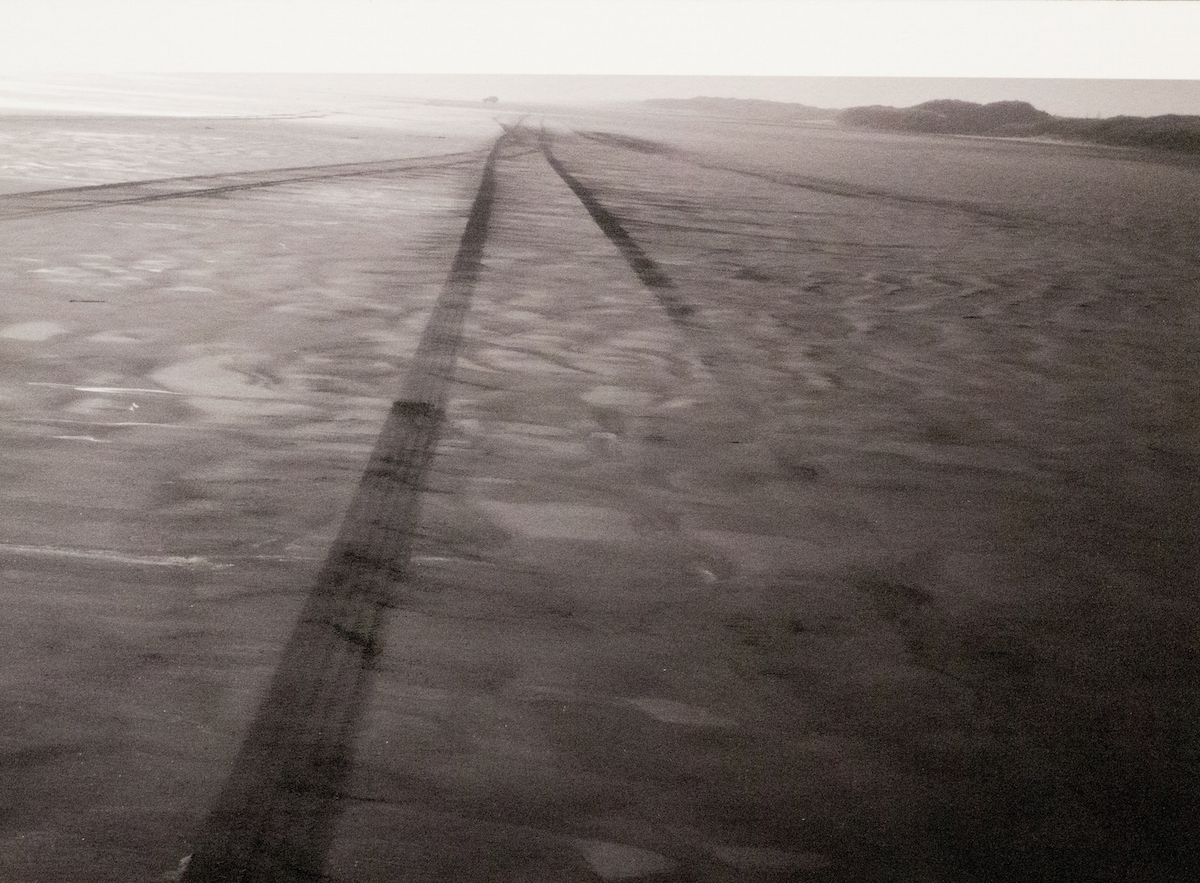 ‘Shihan Elder,’ an old woman in Borneo with tattooed forearms, fingers and feet sits working, gazing at the objects in her fingers. The earth tones, the woman sitting, concentrating on her finger work — the camera is unobtrusive and the photograph of the scene almost seems a part of the scene itself. 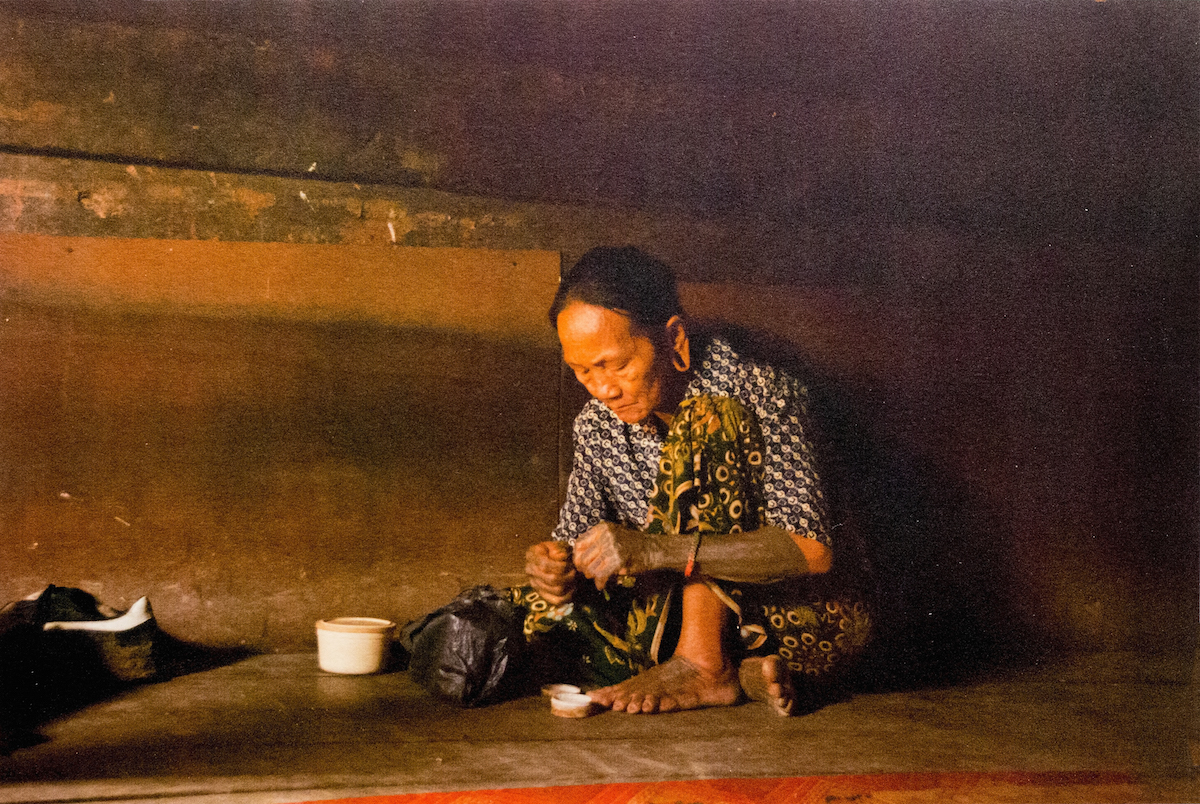 At Wiebe’s show I found myself considering what inspires someone to take the photo beyond a snapshot of memory to a way to describe the world and further to develop interpretations of scenes that become art? While art maintains its notation of what, where, when, certainly, there is also a quality in the image that transcends locale and can speak across borders, languages, cultures. 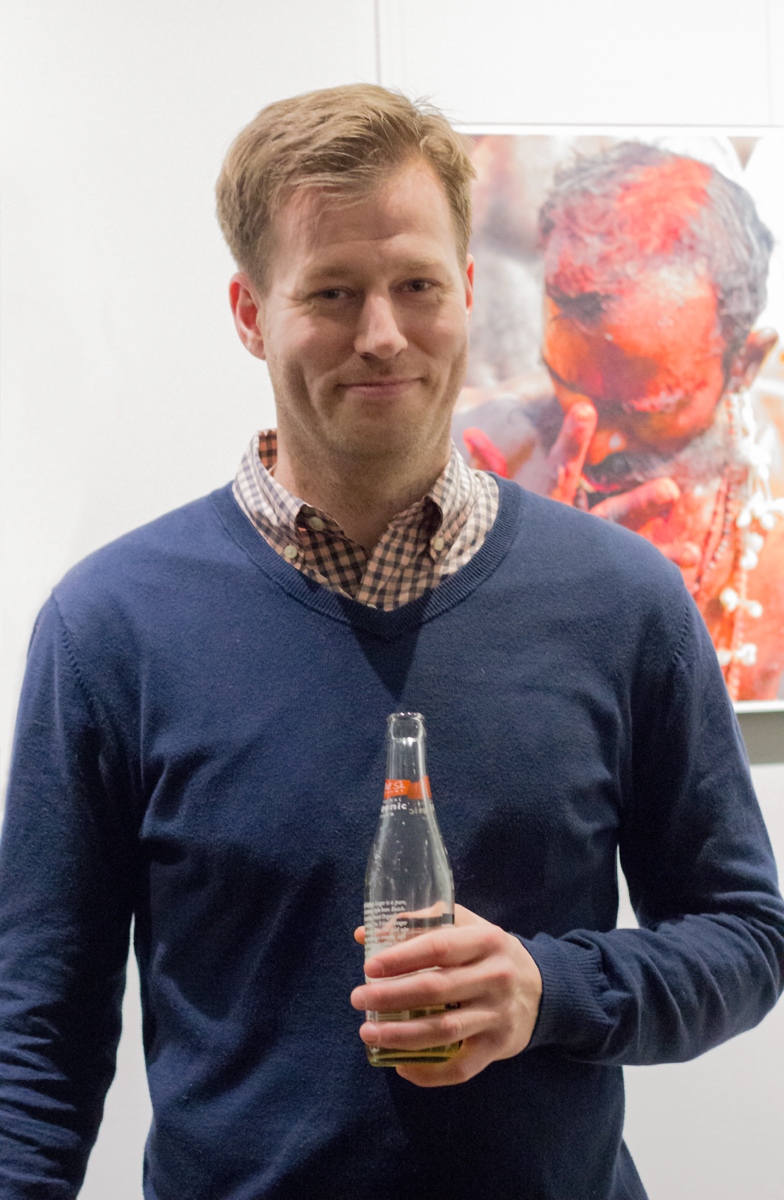 I spoke to Wiebe briefly at the Opening of his show and include that interview below. The transition from snapshot to art photograph clearly happened to the Winnipeg-born chef Lyndon Wiebe. After completing culinary school in Calgary, he drove across Canada in a $50. car. He began travelling abroad working as a chef for 7 years before filming a travel-based food series in 40 countries world-wide with two chef friends that became the commissioned series, Chefs Run Wild, aired by APTN and Escape Network in Canada, and on National Geographic. During the 2-year run of Chefs Run Wild, it was not just the elevation of food into art that Lyndon continued to discover, but increasingly he found striking moments in his travels could be captured in photographs.

Artist’s Statement: Lost In Travels: Solitary Confinement looks at feelings of isolation in the world around us. Even in a group we are still alone in our thoughts. Nature can make us feel isolated when it opens itself up to us -the more surreal and beautiful the moment, the more removed from our surroundings we become, lost in thoughts of awe and wonder.

Biography: Born in Winnipeg, Lyndon moved to Calgary at 16, and after high school drove across Canada in a $50 car -and discovered his love of travel. After graduating culinary school in Calgary, he spent almost 7 years working and travelling as a chef abroad. In 2009 he and 2 chef friends filmed the travel-based web series Without Borders, commissioned as the series Chefs Run Wild on APTN and Travel and Escape Network in Canada, and 40 countries worldwide on National Geographic. On this two-year trip he discovered his love of photography. The photos in this exhibit were taken over several years of travel in Asia, Africa, Canada and New Zealand.

Lyndon is the Head Chef at UrbanSource Catering in Toronto, and brings his wealth of food knowledge from his travels to the dishes he prepares for their clients.

—
Brenda Clews is a Toronto poet and artist who hosts monthly Poetry Salons at Urban Gallery. She may be contacted through her website, brendaclews.com.

With the exception of the gallery photo of Masai Tribesmen, all photos were snapped by Brenda at the Opening Reception of Wiebe's show.
at January 18, 2015 No comments: 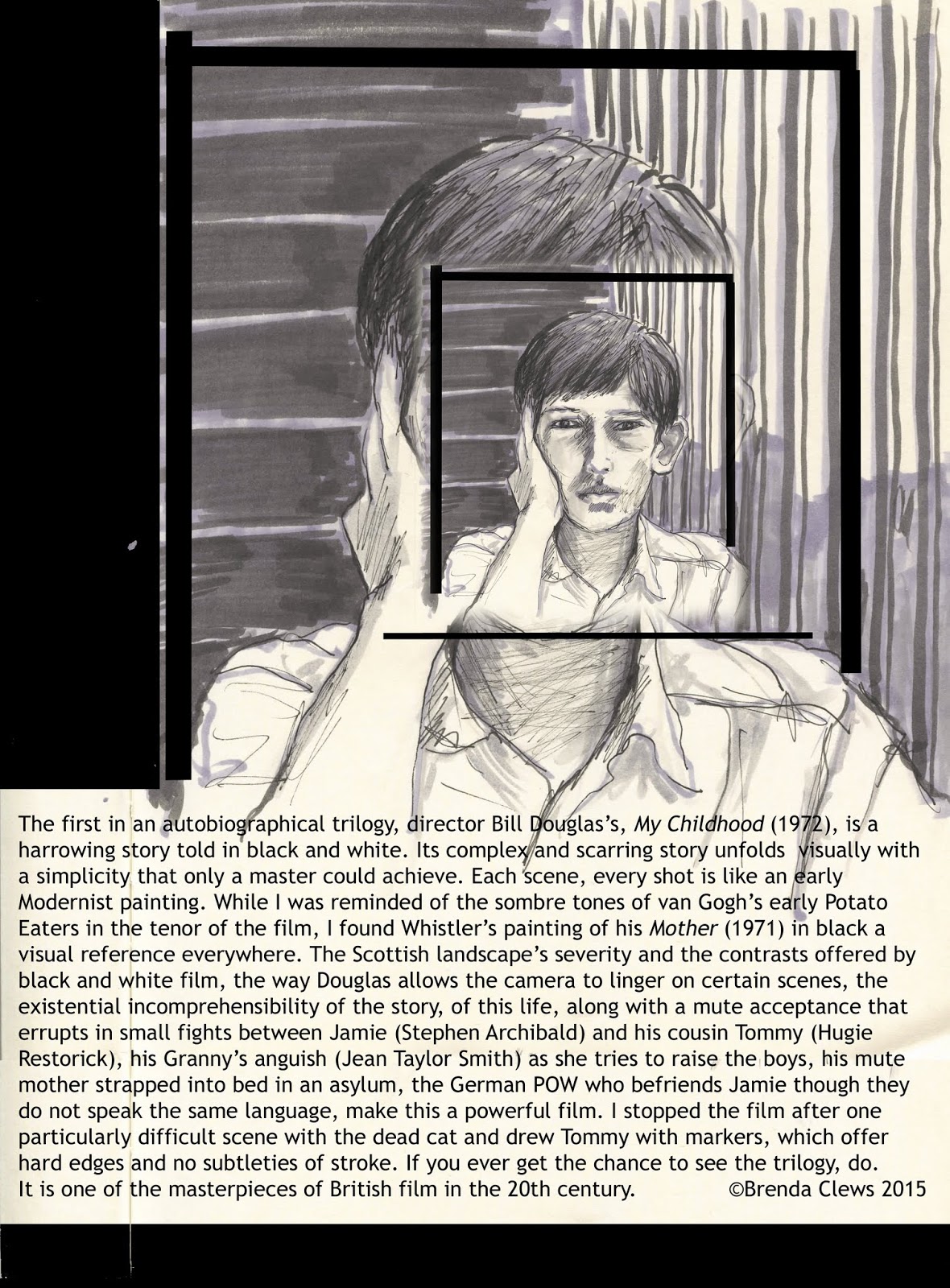 'My Childhood (1972)', directed by Douglas, on Mubi, which I watched last night, and then way too late in the wee hours thought I'd pause and draw... wrote some thoughts on the film into the image... https://mubi.com/films/my-childhood (runs from today's date for maybe another 28 days)